The Beech House Dental Practice TT league has had its closest and most exciting battle for over a decade this season but it definitely ended last week at event 14, the ten mile out and back between Aekendale and Walshford. Pete Watson had broken two league records and put himself one win up in the title race in the previous two events, put in his best ride of the season. He smashed the league record, despite the resurfacing works, with 21:09. Realistically, Duncan Mullier needed to win, with only four remaining events, three of which are hill climbs and consequently more likely not to be dominated by the pair. But Mullier was a long way behind in second place with 21:55. Mullier’s four year reign as champion ended tragically however, as seconds after crossing the finish line he was hit from behind by a car and catapulted into the air. He sustained six broken ribs, a broken collar bone and a broken shoulder blade as well as extensive skin abrasions and will not compete again this year. As the driver of the car did not stop North Yorkshire Police are appealing for dash cam footage from anyone on the A168 between Walshford and Boroughbridge between 7:15 and 7:45 pm on Wednesday 1st August (call 101). The rivalry between Watson and Mullier has been extremely friendly and enjoyed by both competitors and Mullier was able to congratulate a concerned Watson before the ambulance took him away. Watson wins his first league title after competing in the league for several seasons and with seven wins with four to play can still shoot for the perfect nine out of nine. Glen Turnbull, the only other rider who has won an event this season, finished just four seconds behind Mullier in third and was pleased to crack the 22 minute barrier with 21:59. The most improved competition win went to junior Matthew Mullier with 27:30 and a massive 513 second improvement over his time last year The road category was as close as ever, with all three title challengers together in the overall standings but Huw Spacey won again to cement his clear lead in the title race. In the women’s event former champion Joanne Ketteringham recorded 26:55 and an improvement good enough to put her in second place in the most improved category. Gill Crane was in second place a further 1:34 back. The final flat event before the three hill climbs is the nine mile Farnham-Minskip loop. 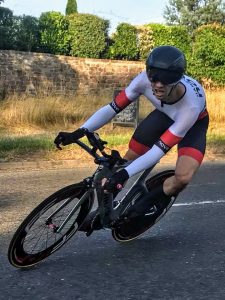