The battle for the Beech House Dental Practice TT League men’s title is entering the last phase with only three flat events and three hill climbs, where the hill climb specialists will come into play, in the best of nine series remaining. The Duncan Mullier versus Pete Watson battle stood at five wins each going into event 13, two laps and fifteen miles around the A168, Marton cum Grafton and Aldborough. The conditions were hot but fast and both riders put in scintillating first laps with Watson 9 seconds up with 15:41. Mullier was only 2 seconds adrift on the second lap. Watson broke the course record and took the win in 31:35, 11 seconds ahead of Mullier. Dave Morris took an impressive third, a further 42 seconds back and taking the most improved rider accolade. Huw Spacey broke the men’s road bike record with 34:36, 19 seconds ahead of Edwin Stokes. The story of the night, however, was the crowning of Corinne Mitchell as Women’s Champion for the third straight year. She accomplished it in style with a women’s veteran record in 37:35. The penultimate event is the less technical ten mile out and back between Arkendale and Walshford.

The Team Swift 12 hour TT in East Yorkshire saw dreadful conditions with the first day of heavy rain in weeks. Nova’s Chris Mawer stepped up to the mark and managed to endure six hours and a half hours. Last week’s 24 hour TT record breaker, Mike Hutchings, got through the bad weather and the course was drying after 8 and a half hours but the event had to be called off when an unrelated road traffic accident made the course unusable. Even starting the prospect of twelve hours in such conditions is dese 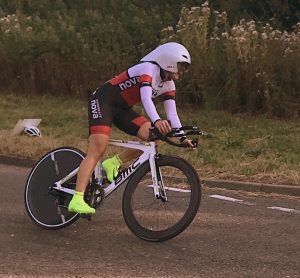 rving of respect. There are many regular TT riders who can’t even consider doing these monstrous events.