↓ Skip to Main Content
Home › News › Mullier wins the Jowett Cup (no not that one, a younger one)!

Mullier wins the Jowett Cup (no not that one, a younger one)!

Duncan Mullier Posted on 25th May 2018 Posted in News

Windy conditions yet again greeted the competitors of the Beech House Dental Practice Time Trial League last week. The course was a ten mile out and back along the A168 between Dishforth and Boroughbridge, which is exposed to the nagging wind. Pete Watson made the most of his power to be up against Duncan Mullier at the halfway point and just like at the last 10 mile out and back at event 2, Mullier was faster back into the wind but this time not by enough and Watson took his second win in a row with 21:52, sixteen seconds ahead of Mullier and just shy of the course record. Ben Wimpory was third a further 23 seconds in arrears. The women’s event was won yet again by Corinne Mitchell, 26:21, 1:14 ahead of a previous Champion, Joanne Ketteringham. The road bike category was won by Huw Spacey, taking his second win of the season in 24:42 18 seconds ahead of Stewart Newton. The most improved rider and winner of the Jowett Cup for Harrogate Nova riders on handicap was fifteen year old Matthew Mullier, breaking the 20 mph barrier with 29:46 and a massive 4:28 faster than last year! 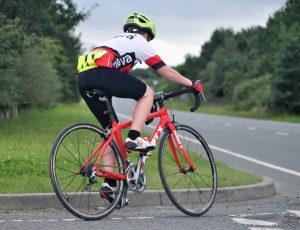