Duncan Mullier Posted on 21st May 2017 Posted in News

Event 4 of the Beech House Dental Practice TT League was a twelve mile loop of the Pennypot circuit for the Triangle Trophy. Conditions were wet and tricky on this technical circuit, which taxes competitors with poor surfaces, hills and a very technical descent of Pot Bank. Patron’s Glen Turnbull set the early pace with 27:10, only to see his time bettered by Nova’s Rob Senior by a single second, but his grasp on the Triangle Trophy was short lived as teammate Duncan Mullier came home in 26:37 to take the trophy for the seventh year running and take his fourth win in four for the season. Senior however won the Most Improved Rider competition with an improvement of 27 seconds, ahead of Dave Mann’s 22 second improvement. The women’s competition was won by Jean Croft in 32:42, who also broke Nova Women’s veteran record for a ten mile TT at the weekend with 22:56 and 4th in the City RC event on Humberside. Lucy Scott was second with 34:39 and Esme Varley took her fourth win in the Women’s road bike category with 35:11. The men’s road bike category was won for the second week in a row by Andy Baker (30:32). Next week riders return to the A168, for a ten mile out and back from Dishforth to Boroughbridge.

Nova’s John Tiffany ventured away from the fast, flat courses to tackle the Tyneside Vagabond’s classic Mountain Time Trial in its 62nd edition. His time of 2:57:30 on the 47 mile mountainous loop in Northumberland was the fastest in the over 70s category. Otley CCs Phil Mason completed the loop in 2:31:47. 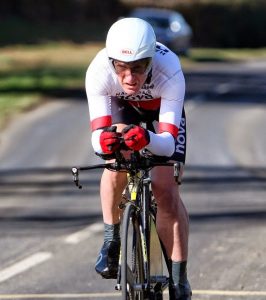 Please post you event reports to press@harrogetnova.cc. If we don’t know we can’t get it printed.