Close battles at Event 5 The Dishforth 10.

Duncan Mullier Posted on 28th May 2017 Posted in News

Event 5 of the Beech House Dental Practice Time Trial League was the ten mile out and back from Dishforth to Boroughbridge. The women’s event was a close fought battle with former Champion Alison Sarmiento of Nova knocking three seconds off Joanne Ketteringham’s 5 year old record with 25:40, only to see Torq’s top Triathlete, Ele Haresign, go 4 seconds faster. Alison, still had the Women’s Veteran record and the Most Improved time in the last three seasons however. Lucy Scott completed the podium with 28:28 and Jean Croft won the women’s road bike category in 28:34. Jean also placed third and 1st Women’s veteran in the Lancashire Road Club 10 at Leven at the weekend with 25:49. New super fast Nova recruit Ben Wimpory has started to find his form and gave series leader and reigning champion Duncan Mullier a nervous wait to see if his 22:06 was good enough to take a fifth successive win. Wimpory was just 14 seconds away (22:20) with Stu Wood taking third in 22:33. Duncan Mullier’s 14 year old son, Matthew, competed in his first road TT and had a grandstand view of his dad crossing the finish line as he came home in 34:14 with the promise of faster times to come in the years ahead. The closest battle of the evening was for the men’s road bike category. Simon Ketteringham set the early pace with 24:05, with event 4 and 3 road winners unable to better it with 25:37 for Andy Baker and winner 25:42 for Stewart Newton, only to see Edwin Stokes, in his first TT event, pip him for one second and a maiden win! Roger Bromiley’s 5th place 23:21 was the biggest improvement since last year and earned him the Thew Cup on handicap. 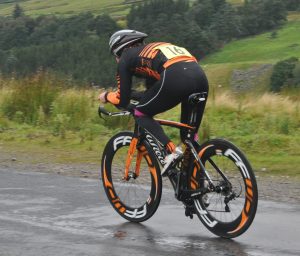 Please send reports of your event to press@harrogatenova.cc, otherwise it will be just news about TTs!