Duncan Mullier Posted on 14th May 2017 Posted in News

Event 3 of the Beech House Dental Practice TT league was the 12 mile loop of Kirby Hill-Dishforth-Sharow-Ripon and back. The forecast promised fast times but winner Duncan Mullier was 5 seconds off his own league record with 26:20. This week he was run much more closely with Pete Watson, bound for Ironman Lanzarote, only 11 seconds behind and setting the third quickest ever time on this course. Former double league champion, Craig Stevenson was third in 27:20. The women’s event was a close battle won by reigning champion Corinne Mitchell (31:21), ahead of last week’s winner Alison Sarmiento (31:36) and Jean Croft (31:45) with Heather Thomson an agonising 1 second away from the podium. The road categories were won by Andy Baker for the men in 30:58, 14 seconds ahead of last week’s winner Stewart Netwon and the Esme Varley made it three wins out of three in the women’s. Nova stalwart Mike Hutchings won the most improved rider competition with an improvement of 3:04! Next week’s event is the challenging 12 mile loop of Pennypot.

At the weekend Nova’s 25 mile TT records were under threat as Corinne Mitchell and Duncan Mullier travelled to Derbyshire for the South Pennine 25. Corinne just missed out on improving her record with 59:21. Duncan was an agonising 15 seconds shy of Steve Smales’ 2015 record, and 8 shy of a PB with 50:57 on what turned out to be a windy day.

Picture of Mike Hutchings at the Nova Open 10 last year. 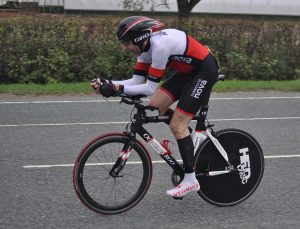