Duncan Mullier Posted on 31st May 2016 Posted in News 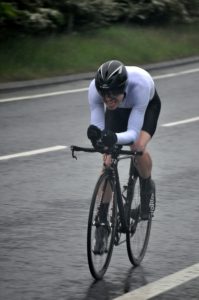 Rain and wind was the reward for those riders who competed in event 5 of the Beech House Dental Practice TT league last week. The course was the ten mile out and back from Dishforth to Roecliffe and reigning champion and winner of the first four events Duncan Mullier was missing an event due to illness for the first time in four years. There were no surprises as to the winner however, as runner up from the first four events, Prologue’s Dylan Flesher, stepped up to the top step in a junior record time 23:16, 41 seconds ahead of Nova’s Dave Morris, with clubmate Roger Bromiley on the podium for the first time with 24:29. The women’s event was won again by Nova’s Corinne Mitchell in yet another lady veteran record time of 25:55, a time that would put her sixth in the men’s event. The Thew Cup, presented to the winner of the event on handicap was won by the improving Ben Seddon. 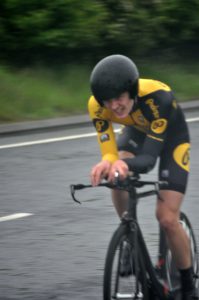 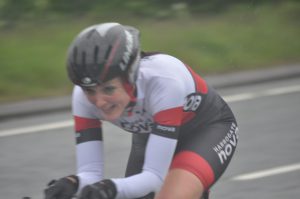 Corinne Mitchell in the records again too. 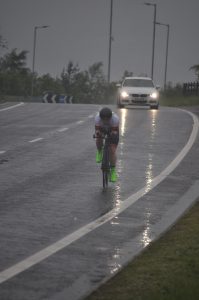 The ever improving Harry Wrightson showing the importance of visible footwear in poor light.

Sorry about the poor quality of the pictures but it really was very dark.