Duncan Mullier Posted on 23rd May 2016 Posted in News 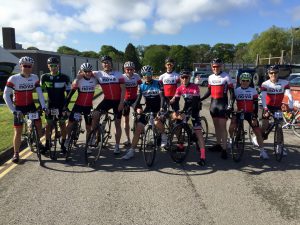 Nova riders Tom Denwood and Simon Ketteringham both broke the course record for the Etape Du Dales last weekend, completing the 110 mile course, including famous climbs of Fleet Moss, Buttertubs and Garsdale Head, in an astonishing 5:40. Nova riders took up seven out of the top eleven fastest times.

Event 4 of the Beech House Dental Practice TT league was a 12 mile loop of the popular Pennypot circuit. The course has a bit of everything, from long straights, stiff climbs, fast downhills and the sting in the tail of Pot Bank. Nova’s Duncan Mullier made it four out of four with 26:22, and won the Triangle Trophy for the sixth year running, but was run very close by Prologue’s Dylan Flesher just 5 seconds behind. The final podium spot was taken by Nova’s Dave Morris (27:18)  edging out Patron’s Glen Turnbull (27:20) and Nova’s Rob Senior (27:23). Nova’s Corinne Mitchell broke the lady veteran’s course record with 30:32, 10 seconds ahead of Ele Haresign with Alison Sarmiento in third (32:33). The most improved rider event was won for the third week in a row by Harry Wrightson with an actual time of 32:49 and a 300 second improvement!