Harrogate Nova’s Pete Watson added a sub 50 minute/30mph average blue riband 25 mile TT to his impressive accolades at the previous weekend with 49:57, just 7 seconds shy of the club record at the Bynea 25 TT in South Wales. It made up for a visit a few weeks earlier when he recorded an agonising 50:01. Club mate Duncan Mullier opted for the Yorkshire Cycling Federation 50 mile TT near Thirsk the following weekend. The blazingly hot conditions resulted in over a quarter of the field failing to finish, but Mullier hung on to record 1:49:57. Club mate Walter Wilkinson recorded an amazing 2:06:22 in the over 70s category! Long distance expert, Mike Hutchings finished in 2:17:06.

The Battle Recommences at the Beech House League

Hostilities resumed between Watson and Mullier at the Beech House Dental Practice TT league. Since Mullier joined the sub 50 25 club in May, Watson has had the upper hand in the league with a run of four very close victories but on a hot evening on the Milby-Asenby-Dishforth-Boroughbridge 12 mile course (shortened due to roadworks) Mullier took a narrow 4 second victory with 26:06. Glen Turnbull, making only his second league appearance was third 29 seconds further adrift and just two seconds ahead of road racer Dave Morris. The women’s event was won yet again by Corinne Mitchell in 30:20. The road category is a three way battle between Huw Spacey, reigning champion Edwin Stokes and Stuart Newton. Spacey is gained the upper hand with a win 42 seconds ahead of Stokes and 58 ahead of Newton with 28:50. The league is now half way through and for the first time in 9 seasons it is far from a foregone conclusion as to who will win the Men’s title with 48 year old 4 times Champion, Mullier on four wins and four second places and 29 year old double Ironman, Pete Watson on four wins and four second places. Corinne Mitchell looks to have the women’s sewn up and Huw Spacey is taking a stranglehold on the rode category. With two events cancelled due to roadworks the most improved ride is still wide open.

Picture of Walter Wilkinson. If anyone could come and take some photos at the events that would be great as we are running out of pictures and some riders don’t have any.

Please submit your events and results to press@harrogatenova.cc 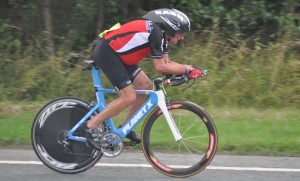