Event 10 of the Beech House Dental Practice TT League, a 16 mile loop of Arkendale to Green Hammerton to Aldborough and back to Arkendale, saw yet more roadwork induced disruption. This time it was the resurfacing of the A168, which composed the first and last sections of the course, a total of 5 miles. The result was soft tarmac and piles of loose stone chippings to limit traction and increase rolling resistance. The event went ahead but times were seriously affected on the poor surface. The close battle for the men’s title took a different turn, literally, when Pete Watson took the turn before he should have to go off course. Duncan Mullier was already on a superfast ride, as he smashed his course personal best by 27 seconds, despite the conditions, to win in 34:26,  1:08 ahead of second placed Jonathan Webber, who was 18 seconds ahead of third placed Rob Senior. Mullier now leads 5 wins to Watson’s 4 after winning the last two events . The road bike category is also getting close with last year’s champion, Edwin Stokes, taking a narrow 9 second win over series leader Huw Spacey with 38:01 and 5th and 6th in the event overall. The third placed road rider, Stuart Newton, won the most improved rider accolade and took the lead in that competition overall. Next week’s event will comprise of fifteen miles of the A168 between Boroughbridge and Walshford, hopefully the road surface will be in better condition.

Picture of Edwin Stokes. If anyone can help with taking photos please get in touch, or if you have events to report on press@harrogatenova.cc 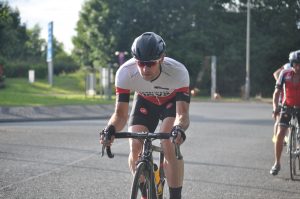