Press Officer Posted on 4th May 2018 Posted in News, Uncategorised

Harrogate Dad of four Tom Denwood, cycling for local club Harrogate Nova, is having an impressive start to the 2018 road racing season. Racing in the 18 and over category, regularly against competition 20 years his junior, he is already ahead of this season’s objectives having retained his ‘first category’ road racing licence, and on his way to gaining a converted elite licence. This would put him in the top 50 road cyclists in the country.

Having won one race in Colne, been on the podium four more times, as well as a 4th and 5th, means he is gaining a reputation regionally as a wheel to follow. On 28 April 2018 he beat double Olympic Gold Medallist Ali Brownlee at a circuit race in north Leeds. In March he and two other riders lapped the field twice in a race in Teesside. One of these riders in the break was Harry Tanfield, the recent winner of Stage 1 of the 2018 Tour de Yorkshire in Doncaster. 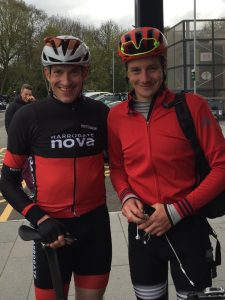 Tom said “Having raced with Harry – two weeks before his Commonwealth Silver, was one of my highlights of the season so far. I thought, if I achieve nothing else, I have kept-up with greatness!” 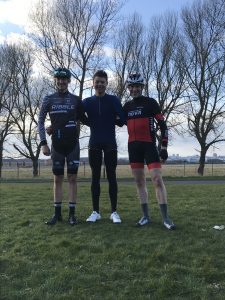 About the season as a whole Tom said “I had two objectives for 2018, one to retain my first cat licence, the second to go for Elite. Having achieved the first within the first 6 weeks of the season I now have a real chance at going elite over the next 6 months. 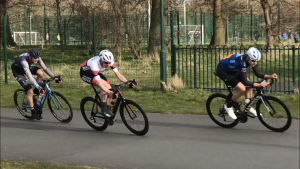 It’s a long journey though, so Tom gives “full kudos to Mrs D and the kids and the lads at Harrogate Nova” for their support. Tom absolutely loves the racing aspect and it’s a welcome antidote to his full-on job being an Executive at NHS Digital. 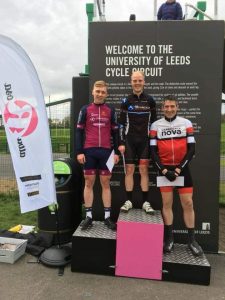 One of the key contributors to Tom’s success this year has been getting coached by Craig Stevenson, of Vitfor training who ensures he can go as fast as he can from the available 8 hours training a week. Tom also appreciates the continued local support in Harrogate from Prologue Performance Cycling and the Specialized Concept Store as well as all of our local cycling clubs which really does show how much Harrogate and Yorkshire contributes to the ever growing national cycling scene.