Duncan Mullier Posted on 7th May 2018 Posted in News

It was showdown time at event 2 of the Beech House Dental Practice TT League on the popular 10 mile out and back from Arkendale Lane end to Walshford. Champion for the last four years, veteran Duncan Mullier, had not faced the up and coming Pete Watson, Ironman turned full time TTer, for nearly a year, during which time Watson has made considerable progress. The conditions were far from good as it was cold and very windy but both riders came within a few seconds of the league record. Watson went out first and set an out time ten seconds faster than Mullier could do, a fairly substantial margin after five miles, but Mullier, upped the effort on the difficult return leg and was fifteen seconds faster than Watson clocking 21:26 to Watson’s 21:31, 5 seconds and 20 years in age separating them! Thirds place, 41 seconds off the pace, went to Jon Webber. The women’s event was won by a returning former Champion, Joanne Ketteringham (26:49) 1:44 ahead of Jill Crane. The road bike category may be tight this year as Champion Edwin Stokes (24:05) won by only a six second margin over a much improved Stewart Newton, who looks like being a real challenger for the road title. Mark Morris won the most improved rider 25:07 at 137 improvement over his best time, ahead of Joanne Ketteringham’s 75 second improvement. Next week’s event is the rolling 12 mile circuit of Kirby Hill-Dishforth-Ripon. 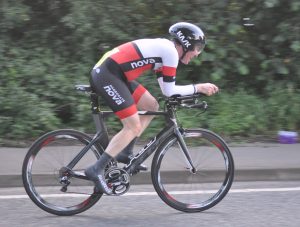 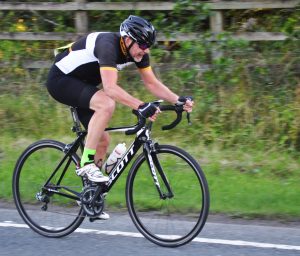