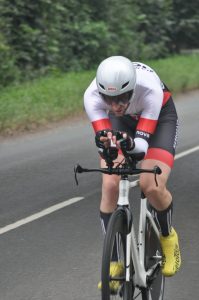 Harrogate Nova’s Rob Senior, who’s been knocking at the door since last season, finally took his maiden win in the Beech House Dental Practice TT League on the 18 mile, 2 lap, Milby-Cundal-Norton Le Clay circuit. Conditions were warm and still and Senior was peerless with 40:55, 54 seconds ahead of teammate Stu Wood, taking the most improved rider accolade in the process and edging towards claiming second place in the league overall behind already crowned champion Duncan Mullier. Edwin Stokes, cemented his lead in the road category with a win while becoming the first road category rider to reach the podium overall with 43:09, 39 seconds ahead of main title rival Simon Ketteringham. The women’s competition was yet again won by 2016 champion Corinne Mitchell in 46:55, 1:42 ahead of Alison Sarmiento in second with Lucy Scott in third. It has also been a good week for Duncan Mullier, seven days after breaking the Harrogate Nova club 50 mile TT record he added the 25 mile TT  club record with 50:38 at the Belper CC event in Derbyshire. It looked like a magic sub 50 minute time was on the cards at the halfway point but a difficult finish as the heavens opened meant the new record was just outside.

Picture of Rob Senior completing the first lap at Milby.