Harrogate Nova’s Mike Hutchings competed in the Team Swift 12 hour time trial last weekend. The event consists of riding 25 mile laps near Market Weighton for a full twelve hours and is for super people only. Mike, who is the only active local rider to have also completed a 24 hour TT, scored 220 miles to finish 24th. The winner was Team Swift’s Blaine Metcalf from Sunderland with 280 miles. The previous weekend Nova’s 70+ Time Triallers, John Tiffany, scored a ten mile TT PB with 24:01, with Walter Wilkinson recording an astonishing 22:23 in the Veteran Time Trial Association 10 on Humberside. Event 13 of the Beech House Dental Practice Time Trial League was yet again disrupted due to roadworks and the planned two lapped 16 mile course was switched to the old favourite of ten miles between Arkendale Lane End and Walshford on the A168. Rob Senior was in a league of his own to pick up his second ever win in 22:05, 46 seconds ahead of Dave Morris and 52 ahead of Roger Bromiley. Jean Croft picked up a win in the women’s event with 26:45, 1:26 ahead of Lucy Scott. The men’s road category is tipping in favour of Edwin Stokes who is starting to pull away from rival Simon Ketteringham, his 23:33 was fast enough to place fourth overall and 38 seconds ahead of road title rival Simon Ketteringham. The most improved category was won by Dave Mann with an improvement of 51 seconds ahead of last year’s Most Improved title winner, Harry Wrightson. The next event will, subject to roadworks, be on the same course again next week. 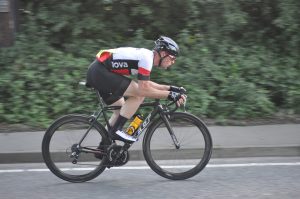