Event 7 of the Beech House Dental Practice TT league was supposed to be the Hilly 19, an arduous event from Ripley, up Bedlam Bank, Hartwith Bank, Dacre Bank and Darley Head before a super fast return to Ripley along the A59. However, for the second time this season, roadworks required a course rethink and the Hilly 16.5 was born with the removal of Bedlam Bank. The status quo looked like being upset when Team KTM’s 21 year old pro Julian Varley signed on. The first rider to set a competitive time was Patron’s former Hilly 19 winner Glen Turnbull in 40:24, but then Nova’s Rob Senior cracked the 40 minute barrier with a stunning 39:53, giving himself a serious chance of winning the Hilly 19 Trophy, before teammate and winner of every event so far this year, Duncan Mullier, improved the mark with 39:27. Julian Varley then crossed the line only to see his time of 40:15 good enough for third and so 47 year old Duncan Mullier took the Hilly 19 Trophy, a victory in the age versus youth battle and a 7 win lead in the best of 9 series. The men’s road bike category was won by another former Hilly 19 Trophy holder, Simon Ketteringham, stopping Edwin Stokes’ run of two straight wins with 42:31 and 43:39 respectively. The women’s event was a clear cut case of Corinne Mitchell domination with 47:43, ahead of Lucy Scott 53:01 and Esme Varley taking another road category win with 57:56. Next week’s event is the Club 25 mile TT on the A168.

At the weekend Nova’s Jean Croft took an Open TT win in the Yorkshire Road Club 25 on the A168 between Boroughbridge and Walshford in windy and wet conditions, recording 1:06:56 in her first attempt at this classic distance. Teammate Stu Wood was 10th in the men’s event with 57:38 and Mike Hutchings 48th in 1:11:35. 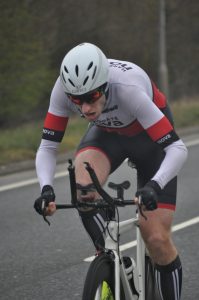 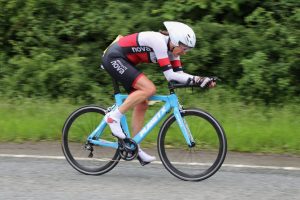 Jean Croft at the YRC25