Blue skies, high temperatures and a light wind greeted competitors of event 8, the Club 25 mile time trial from Boroughbridge to Walshford to Dishforth and back to Boroughbridge. It can be difficult for UK TT riders to cope with heat that they can rarely train in. In the men’s event series leader Duncan Mullier of Harrogate Nova went out hard into the southerly headwind and built up a substantial lead, which he was able to hold onto, despite fading in the heat towards the end. A time of 55:25 was 1:04 ahead of rising star Rob Senior in second and Stu Wood a further 13 seconds back. Fourth place was taken by Roger Bromiley in 57:47, a massive personal best on this difficult course. It was also quick enough to win The Thew Cup on handicap. The women’s event was another dominating performance by reigning champion Corinne Mitchell with a new women’s veteran record of 1:03:47, 4:38 ahead of Jean Croft in second and 7:47 ahead of Lucy Scott in third. The men’s road event saw a third win in the series for Edwin Stokes who was an agonising 45 seconds shy of cracking the magic hour mark. Stewart Newton was a further 3:43 back and Jonty Bright, returning from injury, a further 1:43 in arrears. Phil Mason yet again took the most improved rider over the last three seasons accolade, with 281 second improvement, ahead of Dave Mann (163 second improvement) and Rob Senior (130 second improvement). The riders now have a break to contemplate the ten remaining events in the best of nine series. Duncan Mullier requires just one more win out of those ten to win a fourth successive title and who would bet against Corinne Mitchell retaining her title too? Edwin Stokes must be favourite for the road title with his introduction to the discipline yielding three wins and a second place and Phil Mason is looking good for the Most Improved Rider. 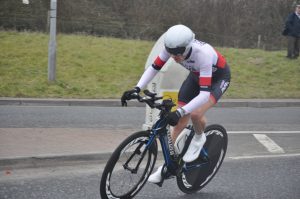