It’s the hill climb season in the Beech House Dental Practice TT league and the first event, and probably the most difficult, is the one mile ascent of Norwood Edge from Lindley Reservoir. The gradient is the steepest at the bottom at over 15%, it eases off in the mid section before a steep finish. The riders really have to go into the red from the start and it’s a matter of who can suffer the most. Prologue’s Dylan Flesher cemented his runner up spot overall in the league for the second year running with a fine win in 5:49, just one second slower than last year. Nova’s Jonathan Webber was five seconds behind and took the Nova Hill Climb Trophy ahead of teammate Simon Ketteringham in 6:10. Clare Riley was the only woman competing on the night with 10:21 but that meant that Jessica Bacon has run out of events to catch Nova’s Corinne Mitchell in the Women’s championship, so Corinne takes her first title! 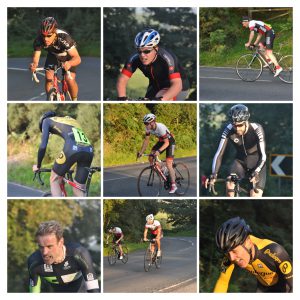 Harry Wrightson was also celebrating as his ninety second improvement was enough to win the most improved rider competition and give him an unassailable lead, ahead of a close battle between Rob Senior and Dylan Flesher.
The next event is the four mile climb from Lofthouse to Scarhouse.

Photos by Duncan Mullier on this link