Posted on 20th July 2015 by Harrogate Nova Posted in News 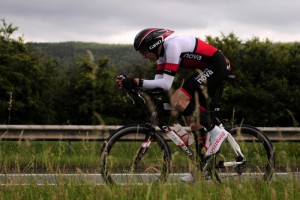 In a bumper week of cycling, dozens of Nova members have been pinning on numbers and racing.  Mike Hutchings undoubtedly took on the hardest challenge by taking part in the RTTC National 24 hour Time Trial Championships.  Setting off just before 2pm on Saturday lunchtime, Mike had completed 340.55 miles by the time he stopped a day later.

Mike’s fantastic accomplishment, a new Club Record, included a 90 minute spell of no riding due to mechanical issues early in the race, and a further half hour hiatus when he came to the rescue of a fellow competitor.  Finding the rider unconscious, Mike dialled 999, and then waited until emergency helped arrived.  A brilliant effort Mike in dramatic circumstances – congratulations.

Ele Haresign was in action on Sunday at Ironman UK.  Ele finished fourth female professional athlete in a time of 10:19:48 after taking on the 140-mile course around Bolton.  Ele came out of the 2.4 mile swim in 4th place alongside eventual winner Lucy Gossage, and gained a place with a strong bike leg over the 112-mile course.

Staring the 26.2 mile run just behind Harrogate-based Caroline Livesey (who finished in second place), supported by the massive crowds, Ele battled through the run.  Dismissing thoughts of giving up, she spent the last 10km shoulder to shoulder with Alice Hector, who just had the strength to get to the line first and the claim the final podium spot.  Congratulations Ele on another super performance.

In Open Time Trials, Duncan Mullier took on two 10-mile TTs in four days.  Recording 19:55 on Wednesday evening at the City RC (Hull) event on the fast V718 course near Hull, he then recorded 21:44 at the Yorkshire Cycling Federation event on the Hatfield/Woodhouse course near Doncaster (o10/1) on Saturday afternoon.  At the Selby CC event on the V718 on Saturday afternoon, Tony Kent recorded 22:41 in breezy conditions for only his third open event of the year.  Second-claim member Jess Bacon, York Cycleworks, was the fastest woman in the same event, stopping the clock at 22:08.

Swapping tarmac for dirt, Edwyn Oliver-Evans finished in 15th place in under-23 event at the 2015 Mountain Bike Cross Country National Championships held at Hadleigh Farm, Essex on Saturday afternoon.  This result was two places better than his 17th at round four of the British Cycling National Cross Country Series in Glasgow a month ago.

Away from the handicap competition, Corrine took top Ladies League honours with an actual time of 38:21 (a new League Course Ladies record).  Alison Sarmiento was runner up with 40:03, ahead of Sarah Cramoysan, Planet-X (41:33).

There was a first League win for Dylan Flesher in the men’s event, with a winning time of 33:52, knocking two minutes off the previous Junior League Course Record.  Simon Cave placed second with 34:13 ahead of a closely packed top five with only two seconds between third placed Al Mitchell (34:28) and fifth placed Pete Watson, Performance Coaching (34:30); Patron’s Glen Turnbull, squeezed into fourth place with 34:29.

A windy Sunday morning brought 200 riders to Nidderdale High School to take on Round 8 of the Yorkshire Cyclo-Cross Association Summer CX series.  The 1.7km course took in all the school had to offer – cinder running track, fast grass football pitches, off-camber sections, switch-backs and a sand-pit.  With three races on offer (Under 8s, Under 14s and Over 14s), Tim Evans and his team put on an excellent event.

From a field of 110 riders, Nick Mason was just off the podium finishing 4th Vet-50, one place ahead of Andy Holgate.  In the Vet-40 competition, Richard Hamilton placed 15th, fully justifying his starting grid position.  Ted Sarmiento placed 31st Vet-40.

With no warm-up time due to supporting son Aaron in the Under 8s race, Rob Senior finished an impressive 15th in the Senior men’s competition.  A dozen ladies made the start line, and Nova’s Kirsty Hamilton took second place in the Senior Women’s race.

Long-distance riding is no problem for Dave Moss-Blundell following his completion of the 900-mile Land’s End to John O’Groats route in just four days in June with his @Cycle4Jenny team-mates.  Taking on the 104-mile Ripon Tour Sportive run by Velo29, Dave mastered the 8,842 feet of climbing with ease, taking sixth place in the King of the Mountains competition for his ascents of Kidstones, Buttertubs Pass and Grinton Moor climbs.

Dave was also the fastest finisher of the event, completing the route, based on the 2014 Tour de France Grand Depart,  in 6 hours and five minutes.

With the pro peloton of the 2015 Tour de France now in their final week, Nova member Michael Leather is enjoying a welcome rest after completing all 3,282km of this years route with the Tour de Force annual charity event.  He took on, and conquered, the flat, the mountains, the cobbles and the team time trial, arriving in Paris on Sunday afternoon.

Congratulations Michael on your superb effort – we look forward to seeing you back in Evening TT League action in August.