Posted on 13th July 2015 by Harrogate Nova Posted in News 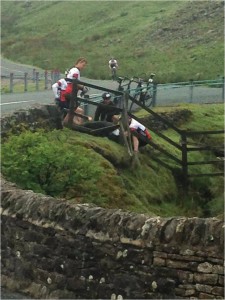 As Tom Denwood, Simon Ketteringham and Andy Baker rolled over the finish line at Harewood House 6 hours and 18 minutes after setting off on the 112-mile Etape du Yorkshire route, they were unaware of the full drama that had unfolded out on the course.

A rider had crashed on the Buttertubs descent, and was over the barrier on the banking, metres away from the 100 foot drop into the river below.  With limited mobile phone reception to call for help, first riders on the scene Mike Worden, Rob Beagley and Greg Ketteringham provided first aid and waited the two hours it took an ambulance to reach the stricken rider.  The rider sustained broken vertebra, a broken leg, a punctured lung along with a smashed helmet.  We wish him a speedy recovery.

Event ten of the Evening TT League was the 13 mile Milby-Asenby-Dishforth-Kirby Hill loop.  Even with standing water on the course and damp and cool conditions, it was a record-breaking night in the Ladies event with Jess Bacon chalking up another League win, and taking another League course record with an excellent time of 32:41.  Corrine Mitchell ran Jess close with another Lady Vet League course record time of 33:46 with Tori Green in third.

It was a cold and damp affair at Round 7 of the Yorkshire Cyclo-Cross Association summer series at Guiseley on Wednesday evening.  A hardy trio of Nova members took part, with Richard Hamilton placing 16th in the Vet-40 competition and Andy Holgate 5th and Tim Evans 10th in the Vet-50 race.

Round 8 of the Yorkshire Cyclo-Cross Association summer series was held in Pateley Bridge on Sunday afternoon.  Two hundred competitors turned up to ride the Tim Evans designed course at Nidderdale High School – full report next week.

Evening TT League regulars Dave Mann and Walter Busuttil placed 3rd and 4th in their respective age groups at the 2015 Ripon Triathlon.  Strong bike sections on the 25-mile course helped both men to their impressive results. 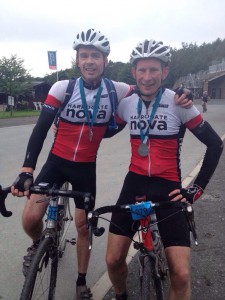 Mark Quinn, Paul Lehan and Niall Frost travelled to the Lake District to take part in the Grizedale Grizzly Adventure X mixed terrain sportive event.  Over 200 riders took part in the event which started and finished at Cartmel Racecourse and took in the trails, fire roads and lanes of the area in a challenging mix of on- and off-road suitable for mountain and cyclo-cross bikes.