↓ Skip to Main Content
Home › News › Newton wins the Road Category and the Thew Cup at the Club 25!

Newton wins the Road Category and the Thew Cup at the Club 25!

The close battle between four time Beech House Dental TT League Champion and young rival Pete Watson saw a decisive blow delivered at event 8, the Club 25 on the A168 between Dishforth and Boroughbridge. Both riders shattered the 6 year old course record, Mullier bettered it by 28 seconds with 54:07 but Pete Watson produced his best TT performance to date with an amazing 53:25 and the biggest margin between the two riders all season, even though Mullier professed to have ridden as well as he could. The league tally is now four wins to Watson and three to Mullier but with the last four going the way of Watson the impetus is clearly with him. The women’s course record was also broken with a former league champion returning after starting a family. Jess Kaye recorded 1:03:12, 35 seconds faster than Corinne Mitchells 2017 record and 52 seconds than Corinne on the night. The road category was won by Stuart Newton in 1:01:00, 42 seconds ahead of last year’s champion Edwin Stokes. Newton also picked up the Thew Cup for the most improved rider in the club 25 with a massive 208 second improvement ahead of Mark Morris’ 196 second improvement. Matthew Mullier, 15 year old son of Duncan, took part in his first ever 25 mile TT. His target was to beat 1:15, which he certainly did with 1:12:33 and 20.7mph average speed. After a rest week next week the riders will return to compete on the Milby-Asenby-Kirby Hill 13 mile circuit. Full results on harrogatenova.cc. 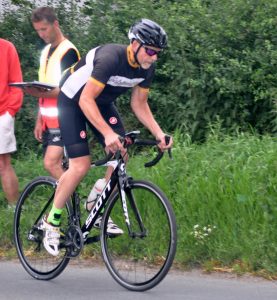