A double puncture at Ironman Lanzarote back in May stopped any chance of bagging a fast time. Having invested on average 10hrs+ hours a week for the last 25 weeks I was determined to put it to rights second time around at 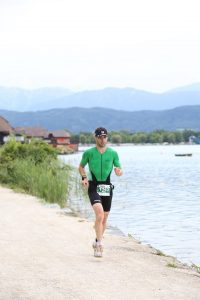 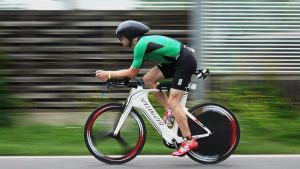 Ironman Austria. Preparation went well in between Lanza and Aus (a six week gap), even though Lanza was a disaster, I felt I had carried over fitness and managed a small training block, not really improving anymore which I was actually OK with. On the tapering week leading up to the race, you normally check your bike is running OK, do a few small runs… maybe a few hard efforts on each discipline just to make sure the legs are there… what you DO NOT want is to slide down the road at 40+kph in torrential rain and land on your hip! Unfortunately, this is what happened on the Wednesday with the race on Sunday. I’d banged my hip quite badly which played on my mind a fair bit, thankfully it settled down and didn’t really impede with running which was my biggest concern.

I think I had the best pre-race night’s sleep I’ve ever had which can only be a good thing. The swim which can often be a frantic washing machine style of white water racing turned out to be very different. Austria operates a rolling start, 8 athletes every 5 seconds – so having found my own space straight away I set out to swim the shortest route possible keeping a close eye on buoys ahead. My swim time of 00:59:41 was on track to predicted timings.

Straight onto the bike (the bit you lot will probably be more familiar with!) the first 30mins or so is easy to go out way too hard with all the excitement and adrenaline, after settling in I found a rhythm and was happy to see my average speed for the for the first hour being 36KPH which if continued would bring me in on target time of 5hrs for the 180KM bike. Thankfully it continued, a full bottle of mostly gels mixed with a 100ml of water meant I needed little assistance from aid stations so could keep moving on through.  It’s a 2 x 90km lap course, I completed the first lap in 2:27:17 and the second in 2:30:10 meaning my target of 5hrs was achieved.

Transition was smooth, quick dismount, dump bike, grab running shoes, ditch helmet and trot out onto the run. My target marathon time was 3:30:00. This is doable for me but you never really know if you’ve burnt too many matches on the bike. There were more than several moments where it would have been very easy to walk or even better stop altogether… but having put such a good time in on the bike I was determined to dig in on the run too. I kept target pace consuming gels regularly and taking on coke, water, red bull, cold sponges and a particular favourite orange segments! I manged to bring the run home in 03:28:59.

This left me with a finishing time of 09:32:28, 98th Overall out of 3000+, 9th in my age group and 3rd Brit over the line. Needless to say there are some very talented and fast athletes racing!

Chuffed to bits, hopefully I can get myself up to 9 races in the Nova league now!