Posted on 9th January 2017 by dave Posted in News 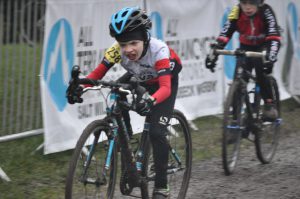 On January 1st 2017, Conyngham Hall and it’s grounds hosted the first running of NovaCross, organised by club members and friends.
Over the course of the day, we held seven races catering for over four hundred competitors ranging between first timers from the local community to seasoned international elite athletes. We estimated that the event attracted over fifteen hundred spectators, many of whom traveled significant distances to arrive the day before. Our children’s races were well supported and we took particular pleasure in seeing nearly sixty Youth category riders take the start. The event had a strong Harrogate Nova identity and has enjoyed good local and regional media coverage.
Our new course, received universal praise with parallels being drawn to ‘Old School Belgian Cross’. The torrential overnight rain of New Year’s Eve provided exceptionally soft ground conditions that provided the toughest possible first experience of the course. Whilst all competitors must feel a real sense of achievement, our podiums were hard earned. Several club members competed, notably Cormac Denwood, who won the Under 8 Boys race. The Elite Men’s and Women’s races had small fields, but certainly didn’t lack quality with Ian Field and Amira Mellor being our race champions.
On behalf of the Organising Team, the competitors and spectators, who all enjoyed a great day of racing, we would like to thank all the individuals, organisations and sponsors that supported and engaged with us on this project. The club would particularly like to recognise the huge commitment in time over the holiday period that the volunteer set-up crew, marshals, officials and take-down crews make.

Some more picture from Duncan, here.