Event number 13 in the Beech House Dental Practice Time Trial League was the V212 10-mile course on the A168 from Arkendale lane end down to Walshford roundabout and back. This would be the third time the V212 had been ridden in the 2022 series so riders would have a final opportunity to try to better their previous times. The weather was warm at around 20 degrees Celsius with a light breeze coming from the south-east so once again, the conditions were very good. 13 riders from Harrogate Nova and Moonglu set off at 1-minute intervals. The fastest rider on the night was Abi Smith of world tour team, EF Education-TIBCO-SVB. Abi produced a storming time of 22:00 and a lady’s record! Abi is a member of Moonglu. Second rider and 1st male was Rob Senior of Nova in 23:20, recording a road bike record. Next fastest was Liam Evans in 24:24 of Moonglu with Richard Buckle of Nova 3 seconds slower in 24:27. Mark Smith (Nova) was 4th male in 25:25 in the road category with schoolboy Tom Davey (Nova) only 1 second behind. Tom was riding a British Cycling youth gear of 52 x 16 so did very well. Thanks go to Rob Senior who set up signage on course, to Margaret and Vaughan who run the league, to Mark Burtonshaw and Warren Considine for time keeping and not forgetting Duncan Mullier who manages the website and results online. Next week’s event is the 9-mile Farnham loop route starting at Farnham crossroads, heading up golf club hill on the A6065 towards Minskip, turning left towards Staveley and back to the start. Pictured are Margaret Carswell, Tom Davey and his dad Richard with Abi Smith in the background. 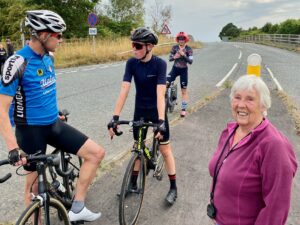