Riders battle the heat and hills in Nova Road Race 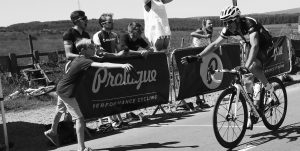 arrogate Nova riders Tom Denwood, Edwin Stokes and Matt Dalby took to start line of the club annual road race on Sunday.  With riders from across the region and further afield 5 laps of the tough Penny Pot circuit awaited them.  To make it even more challenging this year the sun was out in strength and riders struggled to stay hydrated.  But thanks to our race sponsor, Prologue Performance Cycling, fresh water bottles were being handed out as riders crested the finish line at Little Almscliffe crag. 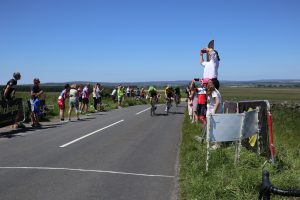 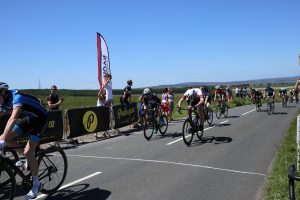 In the women’s race Nova’s Eleanor Haresign decided to throw caution to the wind and enter her first road race.  Normally an accomplished Triathlete, Ele took sage advice from Nova’s Dave Morris at the start line to:

…not ride it like a time trial or a triathlon – be prepared to go above threshold. Quite a lot!

Clearly advice she took on-board with aplomb because after 3 tough laps she sprinted up the hill to finish in 7th place.  After the event, Ele remarked.

I missed the break go on the final turn at Norwood and saw too much daylight. I’d say the cheering on up to the finish definitely helped me dig in one last time. Thanks to all the Novas out in support. Apparently I need to work on my race face – too much smiling!

It was Louise Scupham (Team Jadan-Weldtite), Helen Jackson (Kendal Cycle Club) and Cheryl Vaughan (Beeston Cycling Club) who attacked at Norwood to distance Ele and the rest with Louise the stronger and pulling away on the last 1km. With a nasty kick at 400m to go, the chasing riders were hoping that Louise would tire but she proved she had the stronger legs to take the win.
Commenting on Twitter, Louise said:

Finally got myself a race win at the harrogate nova RR, chuffed to bits after last weekend. #maybeicanclimb @Team_Jadan @UBSscholarships pic.twitter.com/RGdFOax0ls

The Club would like to thank all the athletes who took part and everyone who helped marshal the course and back at the HQ to provide tea, cakes and food for everyone to enjoy.  The Club would also like to thank John Reid of Prologue Performance Cycling who once again kindly sponsored the race and provided prizes and water bottles for our riders.