Posted on 3rd November 2016 by dave Posted in News

Once again, Nova juniors show hows it’s done with young Cormac Denwood claiming the top spot in the U8. 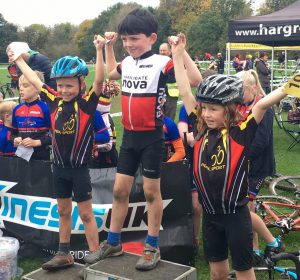 In a closely fought race with two Pedalsport riders Cormac managed to take the lead in the closing laps and then held on for the win.

Magnus Denwood and Mark Ketteringham both rode in the under 10s race. The boys each got off to a great start with

Mark having a close and exciting race with Shibden CC rider Ryden Hindle.  Mark managed to hold him off to take fourth place, his highest finish since moving up to the Under 10s.  Magnus had another strong ride with a great result  finishing 12th.

In the Seniors race, Dave Morris admirably demonstrated to all the by standers how not to bunny hop a log by going over the bars mid way through the race.  No damage to bike you’ll be pleased to hear, but a few places lost and a bit of ego left behind.  A strong line up of Mason, Warren, Gaveling, Evans and part time Nova Sarmiento competed in the V45 and up race with Charlie Warren getting the better of the crew coming home in 22nd place.

The course at Thornes Park, Wakefield was run partly in reverse compared to previous years and included fast grass sections with tight corners and twisty sections through the woods.  The organisers had included two log jumps to test the riders skills and decision making (ahem), with most sensible riders choosing to run the obstacles.  Nova riders were supported by an experienced pit crew this week, despite this wonderful Autumn weather meaning that bike changes were not really necessary the moral support and shouts of encouragement were greatly appreciated (as were the cakes raided from the Cafe van before the Vets could get anywhere near them).

Next weeks race in Sheffield has been cancelled due to issues securing the ground.