Posted on 29th July 2016 by Duncan Mullier Posted in News 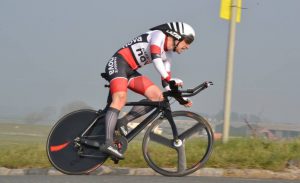 Event 13 of the Beech House Dental Practice TT League was two laps and 15 miles of Matron-Aldborough-Boroughbridge. 2014 and 2015 league Champion Duncan Mullier needed just one more win for perfect score in the best of nine series and a third successive title. Teammate Rob Senior has made a dramatic leap in speed in the last few events and was just four seconds down on Mullier at the end of the first lap and looking for his maiden win. Mullier, however, was even faster on the second lap, pulling another nineteen seconds clear to take the win in 32:34 and thus securing his third straight league title with maximum points. Senior scored his second runner up spot in successive weeks (32:55), ahead of Jonathan Webber (33:04) and Dave Morris (33:25). Despite being fifteen seconds late for her start time and someway off her own course record, York Cycleworks’ Jessica Bacon took her sixth win out of six starts with 36:29, ahead of Nova’s Philippa Moorse (42:24) and Lisa Dinning (42:38). Jess has another five events to complete her nine and wrestle the league lead away from Nova’s Corinne Mitchell. The most improved rider competition was won by Richard Buckle, with an improvement of 218 seconds on his course best. Runaway most improved title leader. Harry Wrightson, had to settle for second place. Next week’s event is the ten mile out and back from Arkendale to Walshford.