Posted on 24th September 2022 by Duncan Mullier Posted in News

Half measures aren’t so much a thing in my book. Either it’s fun and relaxed, or I’m all in.

Back when I was still fairly new on a bike (I first rode a trail centre in 2019) people used to ask me if I raced, I’d laugh and say that was for fit people! But that response flipped for me following a few 14 week long trips working on boats where the only thing keeping me sane was the evening ritual of smashing myself on the anciently old, mega uncomfortable resistance bike in the hot tiny gym, right above the engine room (incidentally that probably put me in good stead for National Marathon Champs). All of a sudden I was desperate to be off the boat and actually doing things on my bike, whether that was enduros, endurance or full on elimination of oxygen from my body (ie. XCO “Cross Country Olympic and CX!).

A lot has happened since then and it’s been a steep learning curve that I still can’t see the top of and I’m working my way through every mistake in the book; from impressively messing up starts, to not fully bolt checking the bike, to taking the ‘easy’ tactical choice (never the right one). But despite all that frustration, there’s been a lot of success, far more than I could have ever imagined and those frustrations have kept me coming back. Saying “I won’t make that mistake again.” And on the whole, I don’t think I have, although there may have been variations of the same mistake!

The season has culminated rapidly for me with crazy ups and downs. XCO National champs was a real low for me, I put everything into it and wanted to show my potential so badly, but I really struggled on the course and while I rode everything in practise I just couldn’t get past the fear of the “A line” drop on my bike, the rut at the bottom causing a massive compression that I just couldn’t get out of my head. The following steep, slick section that just clogged your tires instantly freaked me out even more. The fact that I didn’t think I was good enough for the course really played on me and still does even now, I know with a dropper I’d have been able to ride it, but that doesn’t help remove the fears or the self-deprecation that comes afterwards. No amount of logic or justification can get you over that, it’s just something that I have to accept.

Not long after though was the XCM (Cross Country Marathon) National Champs, up against some really good riders that have been riding far longer than me and probably had far bigger engines than me. But I knew I loved the long, hard suffering and knew the course like the back of my hand due to a reconnaissance ride the weekend before, top tip, know your course. I thought I could do well, and really wanted to after the previous race but crossing the finish line in first was still unbelievable. I was part convinced that there must have been someone in front of me and was fully in the ‘deer in headlights’ mode for all the photos, congratulations and chatter afterwards. Off the back of that an invite to represent GB at the Marathon Worlds was inconceivable for me. So much so that I had to be convinced to say yes! I didn’t think I had the experience, or really deserved to be there. But I’m so glad that I did go:

After 24 hours of travelling to Haderslev, Denmark, it turned out the cabin we’d booked was on the course. For some this would be the worst possible scenario, having such a massive race in your face all the time, and I was a bit worried it would be for me. But actually I think it was the best place we could have stayed. To begin with seeing all the big names and all the teams riding past, all looking focused and, in my head, all discussing the course, race tactics, names on the entry. In reality they were probably discussing the fruit trees along the lane or something equally inane, but the on-edge brain is rarely logical. Over the days though I got used to it and seeing all those big names riding past or passing me on the course all the time definitely helped by the time the night before came around. If anything, the sudden stop of riders the day before was more freaky!

Race day rolled around and despite talking about the start numerous times in various scenarios, no amount of going over it could have prepared me for what it was actually like. Just lining up on the same grid as all of those names (Prevot, Neff, Mitterwallner) was a privilege that I didn’t think I would ever have. But then when the gun went off it was full on, no mercy racing! I’d been told it might be like a road race and if there was a gap I had to force myself into it. That’s exactly what happened, or at least for some people, I let those gaps go – they seemed too small! But then someone else took it, all of a sudden I was sliding backwards in the pack at an impressive rate of knots! I started trying to move forward, picked a number and followed her lines, staying right on her wheel. When the bottle necks happened I managed to jump 5 people at a time and by the time the single track started I was finally in a good group. Unfortunately for me it’s been a while since I’ve actually been riding in a group and I’d forgotten about the elastic effect – it’s always harder at the back! I found myself sprinting regularly as the band stretched and I needed to stay on, but didn’t think I was strong enough to move into the middle of the pack. That was mistake #1. None the less I was staying on comfortably enough by the first feed, 20km in.

Now, mistake #2: We’d (my long-suffering partner Niall and I) discussed lines and tactics at the non-technical A/B lines the day before. We reckoned if you were at the back of the group, reject the A line early and absolutely send it down the B on the assumption someone would mess it up. I went in at the back of the group. I thought about our discussion. I choose the A line, like everyone else. The girl in front of me messed it up. Now we were a good 10s back. The girl in front of her messed up the next bit. Now we were 15s back. A costly choice. We worked together over the next 10km, trying to bring the group back but unfortunately some bad luck found me and my rear tire pressure started to drop, I hoped it would seal and just be a tough ride to the pits but it wouldn’t and before long I was riding in singletrack on the rim. Stopping I pulled out the gas and made mistake #3.

We all get fixated on things sometimes. Inevitably they’re the wrong things and that was certainly the case for me. I really didn’t want to be putting a tube in. The puncture was almost certainly a thorn; I’d had 3 already that week on the trails. A tube would represent probably 10 minutes of being stopped as I removed the tire, tried to find the thorn amongst all the sealant, removed it, put in the tube and proceeded to pump it up with the worlds smallest, lightest pump. And then I’d have to stop at the pits anyway and change the wheel in case another thorn got in and punctured the tube the next lap.

I couldn’t tube it.

So, I gassed it and continued.

Now here; “Why weren’t you carrying plugs!?” I hear you shout. The answer: I was. But I was so fixated on the tube my mind couldn’t even register that plugging it might be an option. Sometimes, too many options are far worse than just having the one. Another mistake I’ll hopefully never make again. Unsurprisingly, the tire went flat after only another km (another stupid mistake; while I may have bolt checked, I’d assumed my tire was still full of sealant from a month ago. It wasn’t.). 17km I rode on the rim, smashing myself to try not to drop too many places. But there’s only so much you can do when trying not to roll a tire off the rim at every corner and protect an expensive wheel from any damaging rocks or roots.

I got into the pits in 40th place, and here I can celebrate a success because I don’t think many people could have changed a wheel faster than we did! Hardly had I stopped before I was rolling again and adrenalin making me desperate to make up places. Unfortunately with only 500m of climbing to go, non-technical single track and no one to work with there wasn’t much time to be had. I managed to make up places to 38th but no further as groups in front had a far bigger aerodynamic advantage than my stubbornness and adrenaline.

Crossing the finish line was a pretty emotional moment as all the frustration, exhaustion and relief flooded to me around the thousands of riders, spectators and pit crews. Annoyed as I am with myself, I still couldn’t be happier with my performance. I dug pretty deep to maintain a position on a flat tire and I learned so much about racing in a single event that might have taken me 5 to learn elsewhere. Recognising our mistakes makes us better next time, but also those mistakes drive us forward, make us dig deeper and train harder. Certainly the main thought in my mind currently is: I’ll show you next year!

So while I’m going to get insanely frustrated with all the ‘Tubeless Demos’ and ‘Amy’s riding a flat again’ jokes, I say; bring it on. Because that certainly was not my potential.

Finally, I’d like to say a big thank you to everyone involved this year in my racing.  Harrogate Nova has been incredibly supportive and I will always be grateful for the support at home and away at races from the Denwood cartel and Dave and Sally Morris (not forgetting Evie – their dog, not the more famous UK rider!).  If you have an inkling about XCO or XCM, give it a go, get in touch and get involved, it’s a fabulous sport that’s tough to master.

I update my Instagram (@amyhenchoz) regularly with training and race results and I’m happy to answer any questions or post about the more technical aspects covered above. 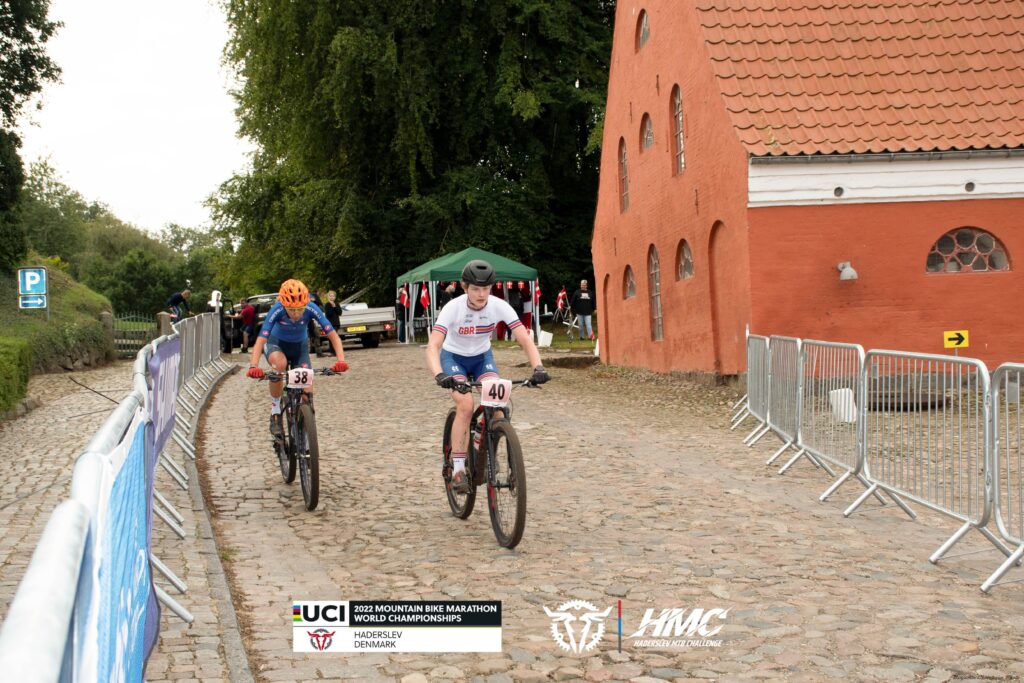 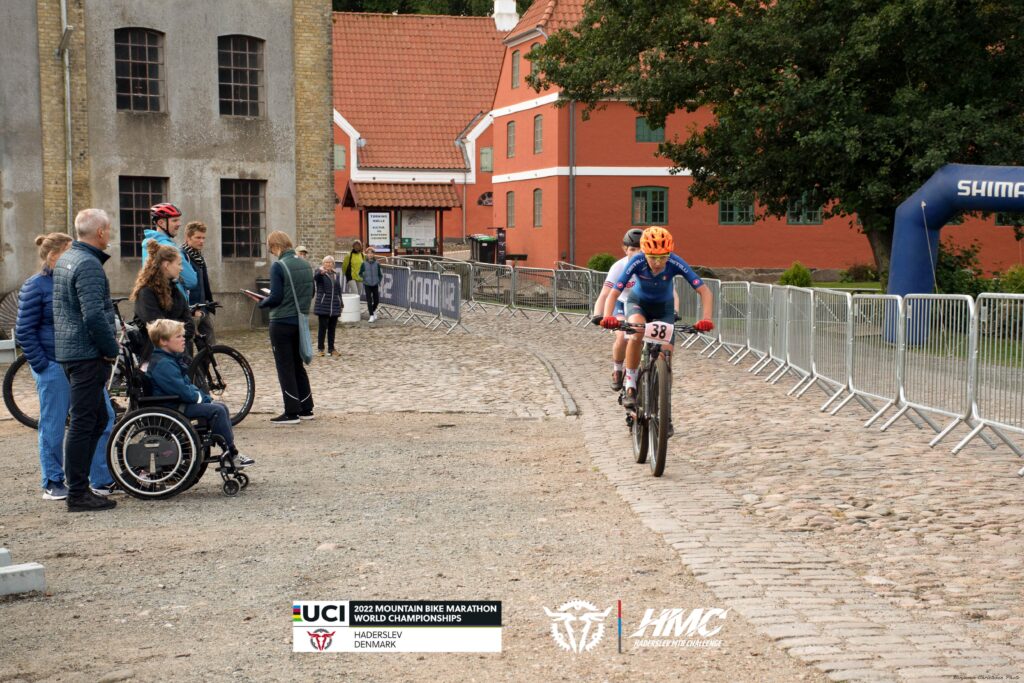 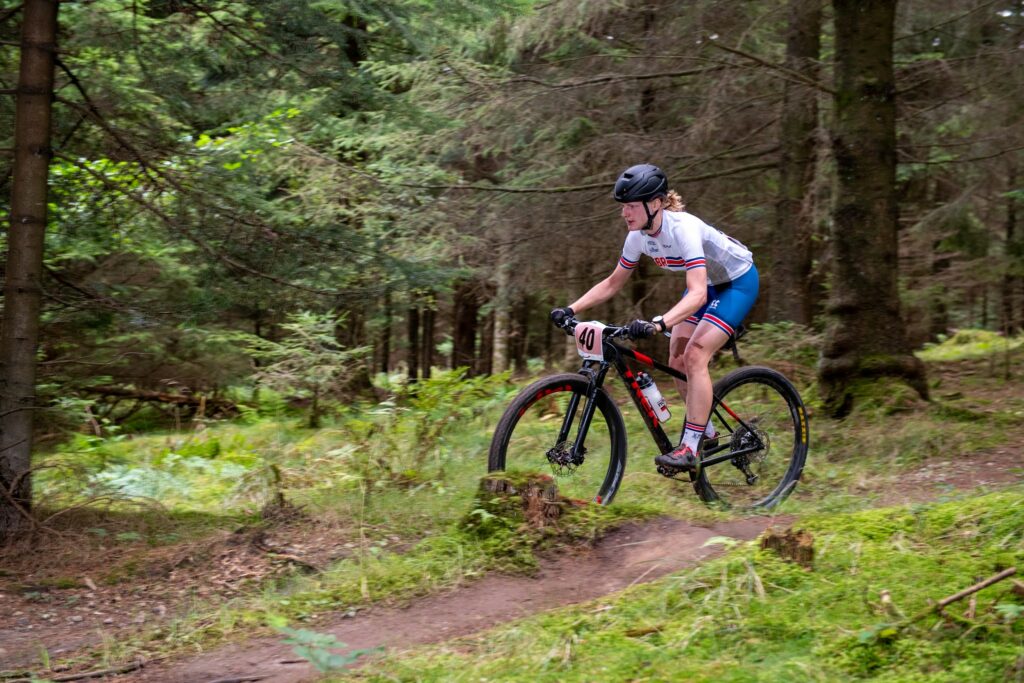 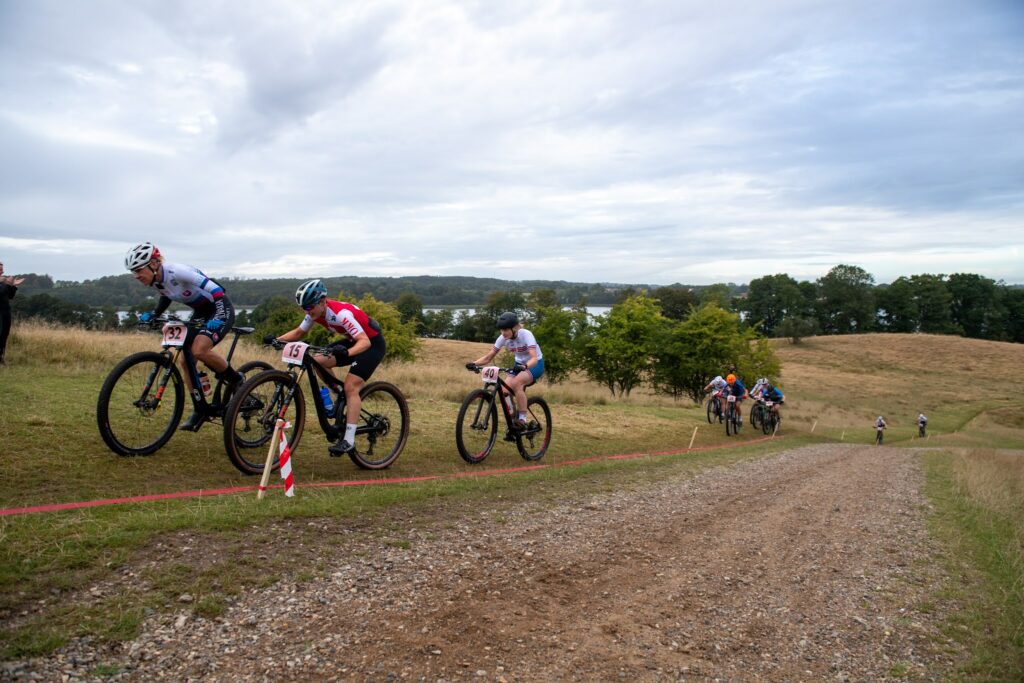 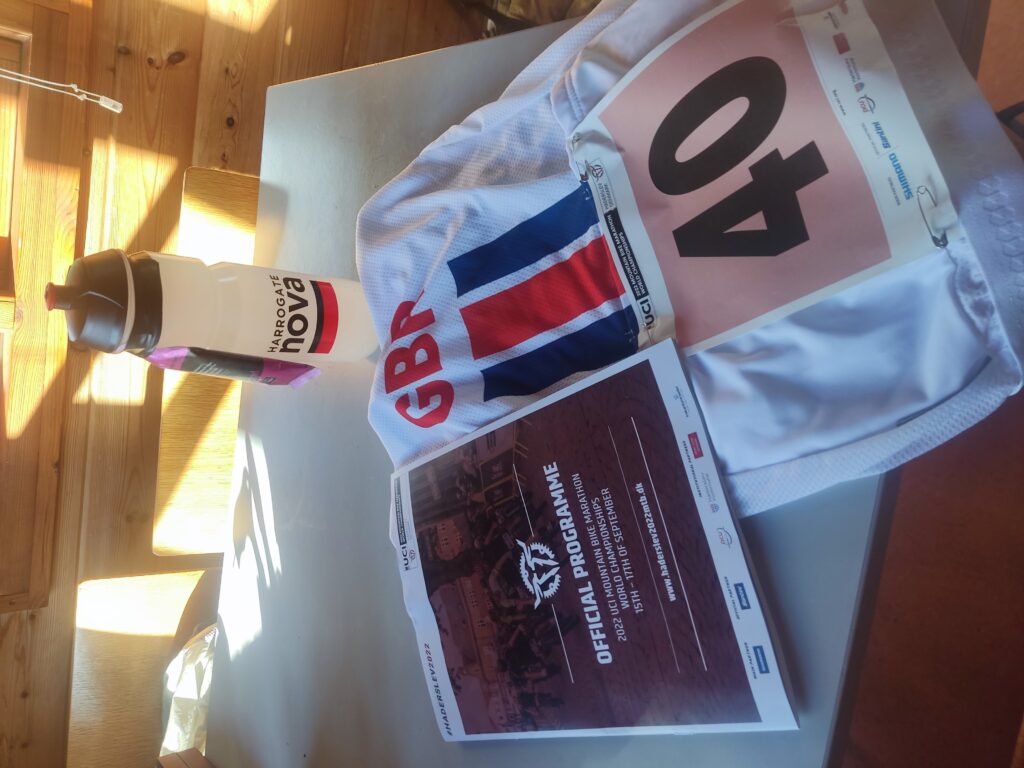 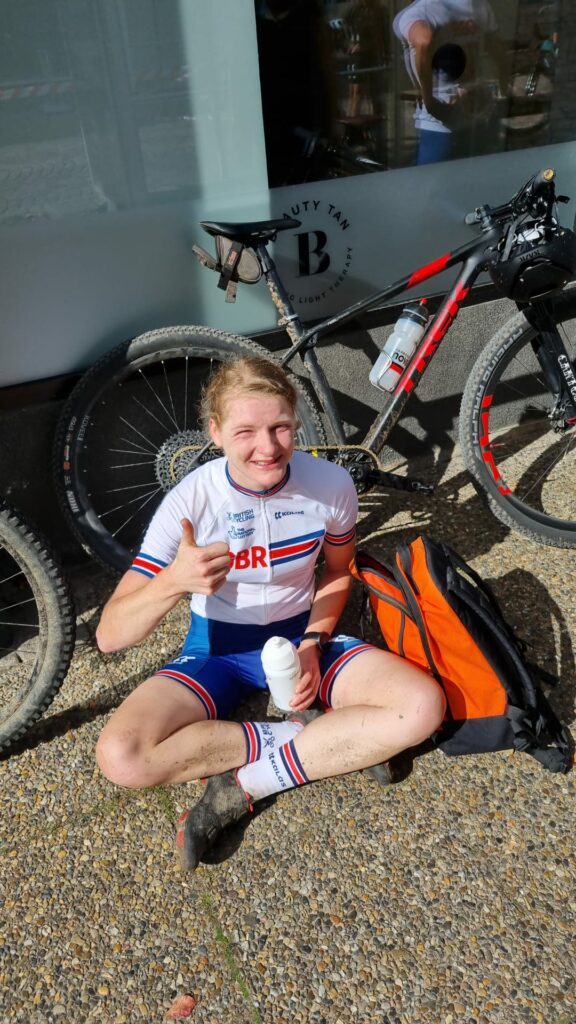