↓ Skip to Main Content
Home › News › A change of course and a road bike PB for Rob!

A change of course and a road bike PB for Rob!

Event number 11 in the Beech House Dental Practice Time Trial League was scheduled to be the 15-mile TT with a 2-loop route starting on the A168 and heading via Marton, Aldborough, Boroughbridge and back on A168. However, due to roadworks on the course near Boroughbridge, the organisers had to make a last-minute change. So, the evening defaulted to the well-known V212 10-mile course on the A168 from Arkendale lane end down to Walshford roundabout and back. This would be the second time the V212 had been ridden in the 2022 series so riders would have an opportunity to try to better their previous times. The weather was warm at around 20 degrees Celsius with a breeze coming from the west-north-west so there was some benefit on the first section down to Walshford and then times where riders were into the wind on the return leg but overall, the conditions were good. 13 riders from Harrogate Nova and Moonglu set off at 1-minute intervals. Once again, Roger Bromiley was fastest rider with a time of 23:03 on a time trial bike. Next fastest rider was Rob Senior on a road bike in 23:19 beating his road bike PB by 25 seconds – a fantastic result! In third position was Richard Buckle with a time of 24:52 in the TT category. Four riders vied for fourth position: Mark Bedford; Mark Smith; Paul Coyle and Walter Busuttil all finishing within 3 seconds of each other! It was Mark Bedford who was fastest in 25:41. Robyn McLean was fastest lady in 30:38. Thanks go particularly to Rob Senior who set up signage on course with little time to spare. Also, to Margaret and Vaughan who run the league and handle the timekeeping on the night. Thanks to Pete Lancaster and Mark Turnock for volunteering, too. Next week’s event is the 18-mile TT 2-loop route starting at Milby, heading to Cundall then Norton-le-Clay and returning in the direction of Boroughbridge and Milby. Pictured is Robyn McLean of Moonglu returning up the infamous red brick wall drag past Allerton Castle. Image courtesy of sarahbehindthelens.co.uk 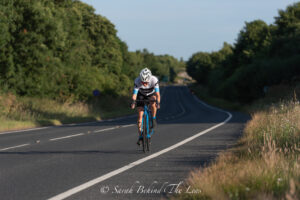