With only a handful events running last year it is to be hoped that this year there will be a full championship of events for the Beach House Dental Practice Time Trial League. The first event, a 9 mile, undulating loop of Farnham to Ferrensby to Minskip and back to Farnham, took place in bright but cold and windy conditions and there was a full field of thirty nine riders eager for competition. In the men’s overall event, five times and reigning champion, Duncan Mullier of Harrogate Nova, had to settle for third place, only the second time in nine years that he hasn’t won the opening event, with 20:51. Now in his 50s it is perhaps time for the new blood to take center stage, as they did with two superb rides from young MoonGlu riders. Ben Peace came second in 20:06 but team mate Tom Stringer broke the course record with 19:47 for a stunning win! School boy, Joe Turnbull (6th), was just 43 seconds behind his experienced TTer dad, Glen Turnbull (4th). In the women’s event, reigning champion Ele Williams, of Nova, pipped team mate, Victoria Tremlin by 58 seconds, with 24:31. MoonGlu produced another stunning ride with another school boy taking victory in the road bike category. Malachy Wicks took victory with 22:54, ahead of Nova’s Richard Stott, in a new school boy record. The women’s road bike category was a tie between Nova’s Elaine Clarke and Moonglu’s Caroline Wallace in 29:05. The most improved rider category was won by Joe Young, with a massive improvement of 86 seconds over his previous best. 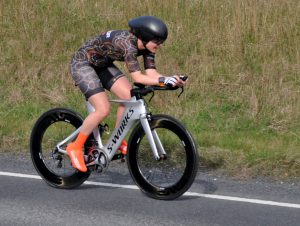 Photo of Ele Williams, winner of the Women’s. If you have any photos of the events then please let volunteer@harrogatenova.cc know.