Posted on 23rd July 2018 by Duncan Mullier Posted in News

One popular training manual for time triallists offers the following advice for riders attempting a 24 hour Time Trial “put your underpants on the outside as you are clearly superhuman”. Harrogate Nova’s Mike Hutchings figuratively donned the superman suit to compete in the National 24 Hour Time Trial on Merseyside at the weekend. Although you could be forgiven for thinking the “24 hour” of the title is not meant to be taken literally, the object of the event is to ride as far as you can in 24 hours over a set of circuits. As if that wasn’t enough roadworks caused problems which meant that the course ended up being hillier and more difficult than intended. Mike was supported by his wife Yvonne, who had to be awake and alert to keep him fed and watered during the whole 24 hour period as he passed on the circuits. After 24 gruelling and agonising hours Mike broke his own club 24 hour record with 353.48 miles a 13.5 mike improvement. The event was won by Harrogate Nova Open regular, Andy Jackson of Aerocoach in an astonishing 530 miles, to become National 24 Hour Champion. Mike’s next challenge is the 12 hour TT, next weekend!

The race for the Beech House Dental Practice TT League title has taken several twists and turns in the dramatically close battle between four times champion Duncan Mullier and young gun Pete Watson. After event 12, two laps and 18 miles of Milby-Cundal Norton-Le-Clay, Mullier was left hoping that there would be one last twist. Watson’s impressive win and new course record (39:12) was 29 seconds ahead of Mullier in second place with Rob Senior a further minute back. The result leaves the battle at five wins each but Watson seems to have the ability to put in astonishingly strong rides as the season progresses and it may be that the twenty year age gap is coming into play. The battle for the road title is also hotting up with last year’s champion, Edwin Stokes (44:11), capitalising on the absence of Huw Spacey to take the win ahead of Liam Evans (44:58). The women’s title just needs reigning champion Corinne Mitchell (46:28) to complete one more events to regain the title. Full results on harrogatenova.cc. 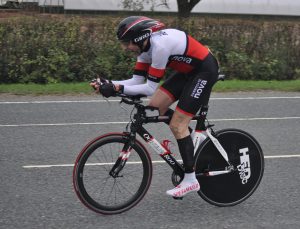