The Beech House Dental Practice TT league has seen the closest battle for a decade Four times champion Duncan Mullier took an early lead over  double Ironman Pete Watson. only to be brought back by Watson before Mullier took the lead again. WIth Watson on holiday it looked like Mullier would take a grip on this year’s title. However that was not the case as Mullier was on an off night and even though the newly resurfaced A168 between Boroughbridge and Walshford made times slower Mullier was way off his PB for the club 15 mile TT. Glen Turnbull recorded 33:40, 10 seconds ahead of Mullier in second place with Jonathan Webber a further 14 seconds back and taking the most improved win. Huw Spacey’s grip on the road title got stronger with 36:12, 46 seconds ahead of reigning champion Edwin Stokes. Former women’s champion Joanne Ketteringham won the ladies event and the Yorkshire Ladies Trophy with 41:24, 2:14 ahead of Jill Crane. Next week’s event is the more technical two laps and 18 miles of the Milby to Norton Le Clay circuit. 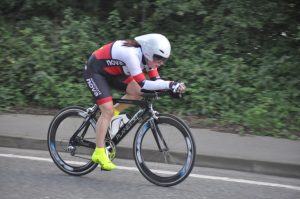