The Fred Whitton Challenge – Nova rise to the challenge

Press Officer Posted on 17th May 2018 Posted in News, Uncategorised

A number of Harrogate Nova riders took part in this year’s Fred Whitton sportive, feared as one of the toughest & most popular cycling sportives in the UK

The challenging route consists of 113 miles around the Lake District, starting at Grasmere and taking in the steep climbs & nerve shredding descents of Kirkstone, Honister, Newlands, Whinlatter, Hardknott & Wrynose passes.

The very top riders complete the route in just under six hours, but eleven hours and over are not uncommon for the average Sportive rider. This is a very tough route often described as the hardest one day ride in the UK, with Hardknott including a 30% gradient at 98 miles into the ride!

With wet roads, but a dry and reasonably warm forecast, 17 riders from Harrogate Nova set off between 6am & 8am amongst 2,400 other cyclists.

The day turned out to be far better than forecast with light winds, so it was a day for potentially fast times, even with the organisers adding an extra climb and 3 miles to the route and so it proved, with 9 Nova riders in the top 34 fastest times of the day. 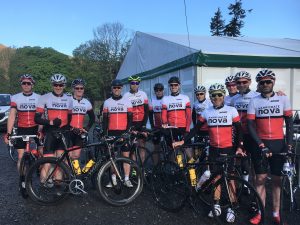 Just to give an idea of the scale of times, the fastest rider recorded a remarkable time of 5 hours 56 minutes and the longest time just over 13 hours.

The support on the road was fantastic with hundreds of people cheering all the riders on. The organisation too was incredible with marshals on just about every road junction. Special mention & thanks should go to Nova “WAGS” Sarah Baker, Emma Stringer and Linnea Stokes who helped support the Nova riders with encouragement, fresh drinks & well deserved supplies.

The ride is a real challenge and everyone who completes it has a true sense of achievement. The Saddleback Fred Whitton Challenge is a charity event in honour of the late Fred Whitton who was a great advocate for cycle sport in Cumbria and North Lancashire. It is with respect to Fred and his ideals that the event remains just that, ‘a challenge’. Fred, who died aged just 50 in 1998, was an extremely popular member of the Lakes Road Club.