Barriers and Records are Broken!

Duncan Mullier Posted on 14th May 2018 Posted in News

It’s been a great start to the season for four time league champion Duncan Mullier. At the weekend he broke the Blue Riband, club 25 mile TT record and the magic 30mph average/50 minute barrier with 49:50 and 4th place of 120 riders from the four corners of the country, in the Sprotzmad 25 in South Wales. Even more impressive considering the conditions were considered less than ideal. Club mate, Pete Watson (6th), had already broken Mullier’s previous record just a few minutes before with 50:01,but Mullier took it back just a few minutes later, the riders having started ten minutes apart. The previous Wednesday Mullier made it three wins out of three in event three of the Beech House Dental Practice TT league with 26:40 on the hilly 12 mile Kirby Hill-Dishforth-Sharrow-Ripon circuit, 36 seconds ahead of a very impressive ride by Dave Morris. TTer turned triathlete, Ben Wimpory was third a further 14 seconds back. Reigning women’s champion, Corinne Mitchell won with 30:58, 2:15 head of Joanne Ketteringham. The road category is really hotting up. Stewart Newton has been running champion Edwin Stokes very close in the first two events and beat Edwin by 12 seconds, but Huw Spacey, making his first appearance won the category with 28:51, a minute ahead of Newton. Spacey almost had to give cycling up only a few months ago after a knee operation and has showed real guts to get back to this level. The next event is the 12 mile Pennypot circuit. 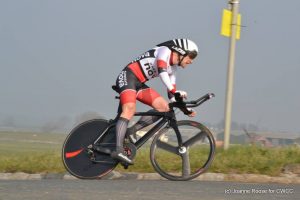