Press Officer Posted on 11th May 2018 Posted in News, Uncategorised

Harrogate cyclists Julian Varley (Team KTM) and Tom Denwood (Harrogate Nova) boosted the towns’ already revered cycling reputation with podium positions at one of the north’s big road races at the Stamfordham Grand Prix Elite race, near Newcastle, on Sunday 6th of May.

On one of the hottest day of the year, it was a war of attrition over the 88 mile hilly course.

After attacking unsuccessfully early in the race, Julian was towed across to the breakaway by Tom, and together they set about driving the break of twelve riders away from the main peloton. With two laps to go of the testing course, Julian, Tom and an elite rider from Ribble Cycles escaped the rest of the peloton and put the hammer down.

Julian put in a powerful attack on the penultimate climb, dropping Tom, and then lit the burners to win the uphill sprint for 1st, with a mightily impressive average speed of 26.1mph for the race.

Tom managed to just hold off the chasing pack, finishing third, to round off Harrogate’s representation on the podium and securing enough points to pass the halfway mark to the much coveted elite licence and to continue his fantastic start to the 2018 RR season. 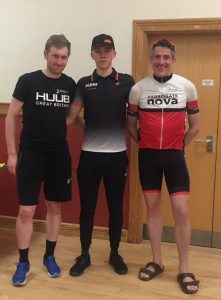