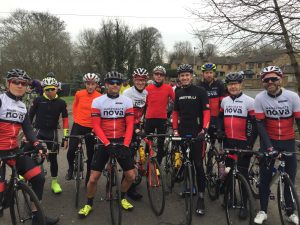 On the 8th April Nova riders took on the now infamous long route of the Ronde van Calderdale sportive which has some very testing climbs on both cobbles and tarmac road sections in and around Calderdale proving that Yorkshire can rival the settings for the early season Belgian classics.

Tom Denwood, Greg & Simon Ketteringham and new member Jerome Marjorel led the charge by setting a high tempo, aggressive pace to the 300 strong peloton from the start. All Nova riders completed the event and returned to the much welcome sight of a bottle of the specially brewed “RvC pale ale” from local brewer Empire given to all riders upon finishing.

Most riders say they hated the route and it’s the hardest thing that they’ve done; but all seem to return the following year.