Posted on 19th October 2017 by Duncan Mullier Posted in News 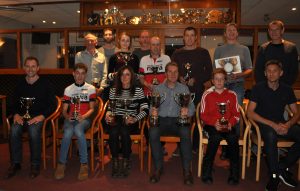 The Beech House Dental Practice TT League Prize presentations took place last week. The Women’s title was retained by Nova’s Corinne Mitchell with the perfect nine wins in the best on nine series, she also claimed the Women’s veteran’s title for the third consecutive year. Corinne also improved her club record for a ten mile TT to 22:30. Second place was taken by former champion Alison Sarmiento just a point ahead of third place newcomer Jean Croft. The men’s veteran’s and overall title was won for an unprecedented fourth consecutive year with maximum points and ten wins out of ten by Nova’s Duncan Mullier, who also took club records at 25 mile (50:37), 50 miles (1:46:16) and 100 miles (3:39:38). In second place was rising star Rob Senior, who took his maiden league win this season. Another newcomer, Stu Wood, took third place.  League stalwart, Chris Mawer, won the over 50s title, with Walter Wilkinson becoming Over 60s champion, despite being over 70!. The most Improved rider title was won by Nova’s Dave Mann. This year a men’s and women’s road category was introduced, where riders compete on standard road bikes and the inaugural champions were Edwin Stokes and Esme Varley. Alex Hamshaw won the Clarke Cup for the fastest ten mile TT by a junior in the season and Matthew Mullier won the Scarhouse Cup for being the most improved rider at the Scarhouse hill climb TT. The riders would like to thank Margaret and Vaughan Caswell for running the events.