Events 16 and 17 of the Beech House Dental Practice Time Trial league signified the time to put away aerodynamic (but heavier) TT specific machines and remove any extraneous parts from the lightweight bike, because hill climb season had arrived. The first of a pair of one mile hill climbs was Norwood Edge, starting at Lindley reservoir. Experienced hill climber Simon Ketteringham set the pace with 6:03, 1:17 ahead of Dave Mann but Jacob Vazey, making his first league appearance this season, came close to the league record with 5:34 to win the event and climb the Hill Climb Trophy. Ele Haresign won the women’s event in 7:22, just 5 seconds away from her own league record and 43 seconds ahead of Alison Sarmiento who equalled the women veteran’s record, ahead of Esme Varley in third with 8:45. Harry Wrightson won the most improved rider category with a 33 second improvement on his personal best, ahead of Chris Mawer. Event 17 was the ever so slightly less arduous 1 mile climb of Darley Head. Again it was Nova’s Jacob Vazey who took top honours with 4:27 but he was pushed very close by Patron’s Glen Turnbull who was just 2 seconds in arrears, with Simon Ketteringham 19 seconds further back. The women’s event was won by Alison Sarmiento in 6:28, 54 seconds ahead of Lucy Scott. The most improved rider category was won by Phil Mason, with a 23 second improvement, pushing Chris Mawer to second place for the second week running. The final event of the series is the four mile steady climb of the private Yorkshire Water road from Lofthouse to Scarhouse Reservoir. 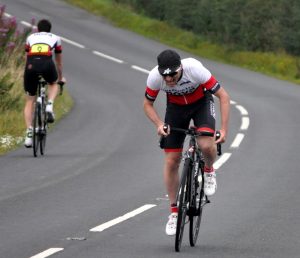