The final time trial before the hill climbs start of the Beech House Dental Practice Time Trial League should have been a repeat of event one, but since event one had a course change due to road works it was a relief to get back to schedule and do a nine mile, rolling lap of Farnham to Minskip to Farnham. Conditions were good, as the stiff breeze from the north would help riders return whilst being sheltered on the way out by high verges. Harrogate Nova’s Pete Watson, was in a class of his own to take his third win of the season with 20:43, 25 seconds ahead of Stu Wood and 59 ahead of Roger Bromiley. Stuart Newton won the road bike category in 23:16, 22 seconds ahead of Andy Baker and Harry Wrightson, last year’s overall Most Improved Rider, won the most improved competition with a 40 second improvement ahead of Roger Bromiley with Dave Mann solidifying his lead in the overall most improved competition with another podium. The night, however, belonged to Corinne Mitchell, who’s ninth win in the best of nine series confirmed her as the 2017 Women’s Champion for the second year running, with a time of 24:14, 54 seconds ahead of Jean Croft and 1:21 ahead former Champion Alison Sarmiento. Next week’s event is the one mile hill climb of Norwood Edge.

Pete Watson’s week got even better at at the Bridlington CC 10 mile TT on the fast course on Humberside. He broke the magic 20 minute barrier with 19:48. Patron’s Glen Turnbull scored a 10 mile PB with 20:04 and Jon Webber recorded 20:16. Stu Wood improved on his time of the week before with 20:34. Walter Wilkinson 23:06, Duncan Glover 23:33 and John Tiffany 25:19. Duncan Mullier suffered a puncture and was recorded as Did Not Finish. 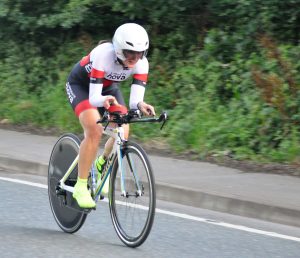