Nova’s Duncan Mullier completed an unprecedented fourth TT title in a row at event 9 by claiming a ninth straight win in the best of nine series. The conditions could not have been more different to event 8, which was played out in scorching heat, this time wind and rain made for a difficult evening’s racing. The course was changed to one nine mile lap of Milby, Thornton Bridge, Cundall, Norton Le Clay due to roadworks on the original 12 mile course. Patron’s experienced roadman and skilled bike handler Glen Turnbull skitted around the technical and wet course in a time of 20:26 to set the pace, but, despite dropping his chain and losing a few precious seconds on the start line, Duncan Mullier clinched the win and with it the 2017 title with 20:04. The podium was completed by Roger Bromiley in 21:34. Mullier is now one Championship behind Steve Smale’s all time best total of five titles. The women’s road and overall event was won by Jean Croft in a time of 25:55, 13 seconds ahead of Lucy Scott, while Stuart Newton won the men’s road bike event in 22:48. New week’s Beech House Dental Practice TT event is the rolling 16 mile loop of Arkendale, Green Hammerton, Aldborough and back. 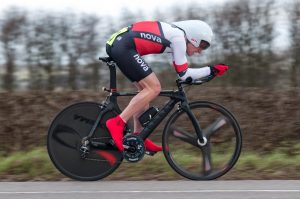