Riders battle the wind at Event 2

Duncan Mullier Posted on 7th May 2017 Posted in News

Event 2 of the Beech House Dental Practice TT League was the 10 mile out and back of Arkendale Lane End to Walshford and back. It was a difficult night with a headwind on the uphill return leg, so times were not likely to be fast. Reigning champion and last week’s winner, Duncan Mullier, paced his ride to perfection to narrowly dip under 22 minutes with 21:58, 20 seconds ahead of Pete Watson and 45 ahead of a tie for third between Patron’s Glen Turnbull and Nova’s Rob Senior. Two seconds further adrift was new Nova recruit Ben WImpory, who has a faster personal best at this distance than club record holder Duncan Mullier, so some real competition may well be on the way when he adapts to his new aerodynamic position. The womens’ event was won by 2015 champion Alison Sarmiento in 26:33, 27 seconds ahead of Jean Croft with Heather Thomson in 3rd in 27:09. In fourth was, returning from injury, multiple former champion Joanne Ketteringham (28:04). The road event was won by Stewart Newton in 26:26, 22 seconds ahead of series leader Mike WIlberforce. The womens’ event was won for the second week in a row by Esme Varley in 30:40 ahead of Millie Jones. Next week’s event is the hilly loop of Kirby Hill-Dishforth-Sharow-Ripon.

It would be good to have reports on The Fred Whitton and the Ilkley 2 day stage race. press@harrogatenova.cc 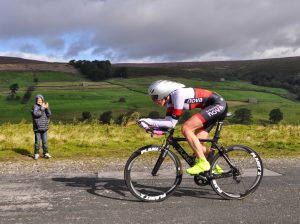