The League gets underway with new road category

Duncan Mullier Posted on 1st May 2017 Posted in News

In the week the Tour De Yorkshire came to town it was back to business as usual for the local Time Triallers of the Beech House Dental Practice Evening League. Event 1 was a slightly rearranged, due to roadworks, 9 mile course of Farnham cross roads to Staveley to White Cross to Minskip, Staveley and back in extremely cold conditions. This year a mens’ and womens’ Road trophy has been introduced, where riders who do not ride specialised aerodynamic bikes can compete against each other. The inaugural mens’ event was won by Nova’s new top time trialist Ben Wimpory in 22:20, 18 seconds ahead of Scotton 100 winner Jonty Bright. The women’s event was won by Esme Varley in 26:05 ahead of Jennifer Watson in 27:24. In the main event it was business as usual as both 2016 Champions came home in first. Corinne Mitchell only had the two other road riders to contend with and won in 23:30. In the men’s event 2014,15,16 Champion Duncan Mullier won in 19:28 ahead of Rob Senior 20:14 and Pete Watson 20:15. Next week’s event is the ten mile out and back of Arkendale Lane End to Walshford and back. 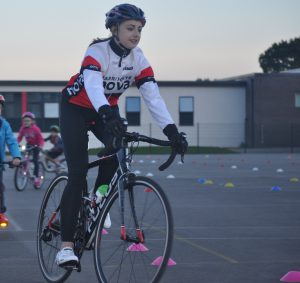