The Beech House Dental Practice Evening TT League starts next Wednesday on the nine mile hilly Farnham-Staveley loop, and some of the competitors have been engaged in early season action on the Open TT scene. Last weekend Nova’s 2010,11 and 12 Women’s Champion returned to racing after a long layoff with injury at the Otley CC 10 on the Arkendale Lane to Walshford course recording an impressive 26:50. Teammate and Reigning Champion Corinne Mitchell came home in 25:52 with Nova newcomer Jean Croft clocking 27:12 and another former women’s champion, Heather Thomson 27:31. In the men’s event Nova’s Pete Watson was 11 seconds quicker than new Nova recruit Stu Wood with 22:11 in 10th and 22:22 in 14th respectively, with an impressive over 70s result for John Tiffany with 27:22. The following weekend held the Yorkshire Cycling Federation 25 on a windy A19 north of Topcliffe. Nova’s triple league Champion put an indifferent open season last year behind him to take an impressive third out of over 100 of Yorkshire’s finest riders with 52:46, just behind the Nova Open winner Joel Wainman of SSLL Racing (51:59) and Yorkshire’s top dog, also of SSLL, Simon Beldon (51:08). Nova’s Stu Wood was the next best Nova rider in 12th (54:21), with Roger Bromiley 19th (56:13) and Mike Hutchings with 1:10:19 in 86th. The following day Stu Wood took to the start line again in the Otley 25 between Boroughbridge and Walshford with 57:16 in 15th, just behind teammate Pete Watson 56:55, 13th. The event was won by Vive Le Velo’s Adam Duggleby in 51:54. 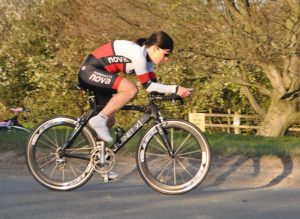