Last week Harrogate Nova’s 8 year old Mark Kettringham competed at the British Cycling Regional Grass Track Championships at Roundhay Park in Leeds. The event comprised of a half lap time trial, a one lap sprint and a one lap scratch race. Mark had a closely fought battle with East Bradford CC’s Ryden Stott, particularly in the sprint and scratch race but emerged victorious to claim the gold medal!.  Mark is a product of Harrogate Nova’s junior coaching and a real talent to watch in the future.

Event 12 of the Beech House Dental Practice TT league was run in unusually hot and windy conditions, after season of mostly cold, wet and windy condition, and composed of 18 miles and two laps of Milby-Norton Le Clay. Nova’s Duncan Mullier (40:56) scored his eighth win in the best of nine series to be within touching distance of his third straight Championship. Clubmate Rob Senior scored his best ever result with second, 41 seconds behind. Event XX winner, Jonathan Webber (Nova) had to settle for third a further 22 seconds behind and a narrow 3 seconds ahead of Patron’s Glen Turnbull. The Women’s title looks less clear cut with Nova’s Corinne Mitchell enjoying a good lead but York Cycleworks’ unstoppable Jess Bacon broke the course record with 45:24 and had clearly won every one of the five events she has competed in and with six events to go, including two hill climbs, she could yet snatch away the title. 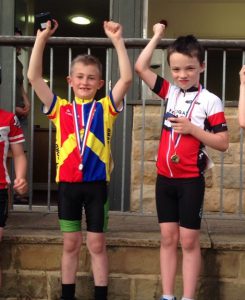