Mullier back to winning ways and Corinne wins the YLCA Trophy! 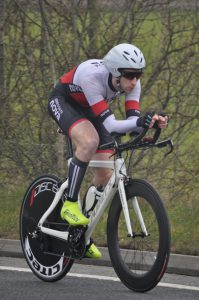 The charge for the men’s title in the Beech House Dental Practice TT League had become more clouded in the previous two events with double Champion and series leader, Nova’s Duncan Mullier, enduring consecutive defeats by Prologue’s record breaking junior Dylan Flesher and three in a row could just tip the balance. Flesher smashed another junior record, this time on the fifteen mile out and back from Boroughbridge to Walshford, with 33:33, but it wasn’t enough to put the pressure on Mullier, who won the event with 33:26, taking a seven wins to two lead in the best of nine series, with seven events to go. Ride of the night was Rob Senior’s 33:53, another ride that is getting very close to the two battling it out for the title and putting clear air to fourth place Harry Brook-Dobson  (34:32).  Last summer, Julian Varley was racing with the professionals in Belgium, but this year illness has taken its toll, so it was good to see him competing again, coming home in 9th with 35:39. The ladies event was the fourth win out of four by York Cyclework’s Jessica Bacon in a new record of 36:38, 1:15 ahead of series leader Corinne Mitchell, who broke the lady veteran’s record and claimed the Yorkshire Ladies Cycling Association Trophy. Harry Wrightson won his sixth Most Improved Rider Event of the season with an actual time of 39:25 and a massive improvement of 271 seconds and is clear favourite to take the Most Improved Rider title overall. The next event is two laps of the Milby-Norton-Le-Clay circuit.