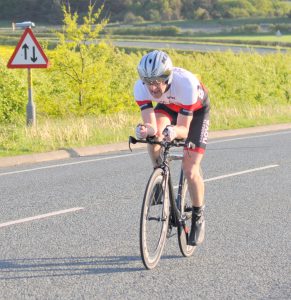 Harrogate Nova now boasts a National Record holder. Walter Wilkinson broke the national record for over 70s for a fifteen mile TT last Sunday on Humberside with an amazing 32:25 in perfect conditions. That’s an average of 27.8mph! The previous weekend Nova’s Alison Sarmiento competed in the UCI TT in Peterborough and finished 7th, an agonising 11 seconds shy of qualifying for the UCI Masters World Championships to be held in Perth Australia.

Gremlins made the presence felt at the Beech House Evening TT league, event 7, The Hilly 19 from Memwith Hill-Killinghall-Summer Bridge-Darley. They started by inflicting road works on the organisers, who had to change the start and finish taking Darey Head out of the course. They then broke Tom Denwood’s spoke and removed the easier gears of Duncan Mullier’s machine during the warmup. Denwood was pleased to borrow Mullier’s spare wheel before battle commenced. Prologue’s Dylan Flesher set the early mark with 43:29 before a weary legged Mullier took top spot with 43:03 only to see his own wheel whizz past 2 seconds faster under the control of hill specialist Tom Denwood, who took possession of the Hilly 19 Trophy. The ladies’ event saw the first battle between Nova’s undefeated Corinne Mitchell and 2015 series champion Jess Bacon. Jess won with an astonishing 46:46, 3:05 ahead of Corinne! The Most Improved Rider event was won by Richard Buckle.

Photos to come, when I get a free moment.