Posted on 19th March 2016 by Harrogate Nova Posted in News 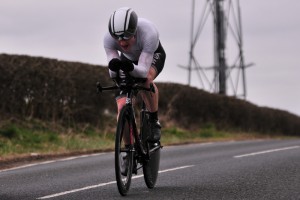 Philip Graves on his way to breaking the V262 course record

In cold conditions, Graves took the win with a time of 51:13, smashing the previous V262 course record of 52:51 set by Steve Berry in 2012.  Andy Jackson (SSLL Racing Team) was second with a great ride of 51:49.  In a tightly packed top six with only two seconds between four riders, Joel Wainman (SSLL Racing Team) was third with 54:32; Nigel Haigh (Strategic Lions-JSCycleshack) and Stephen Ayres (Bronte Wheelers) tied for fourth with 54:33 and Ben Wimpory (PMR @ Toachim House) was sixth with 54:34. 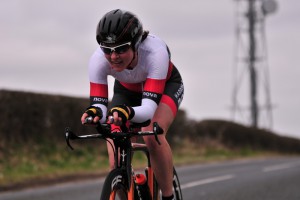 Getting proceedings underway at 2:01pm, Harrogate Nova’s Rob Senior was the fastest Club member finishing in 59:47, setting a new course PB in the process.

Thanks to all Club members who helped out at the event by cake baking, marshalling and supporting.

Full results are here and some photos from the event are available here.