Spring Starts Here & Racing Round Up

Posted on 7th March 2016 by Harrogate Nova Posted in News

The leap year may have brought an extra day of winter (29th of February) before the arrival of meteorological Spring on 1 March, but the actual weather had its own ideas with the temperature plummeting and snow falling across the District.

This provided ideal photo opportunities for hardy cyclists in the Harrogate Nova Strava Club.  Simon Ketteringham found snow en route from Windermere to Harrogate.  There was plenty of the white stuff in Nidderdale: David Jackson found snow on Trapping Hill & Graham Schofield found snow on top of Two Stoops.  Bruce Walker found frozen fields and a temperature reading of minus 3.8°C on a morning commute from Harrogate to Leeds.

Meanwhile, Darrell Varley enjoyed a perfectly timed week of short-sleeved sunshine in Majorca – clocking up the miles & topping up the tan lines. 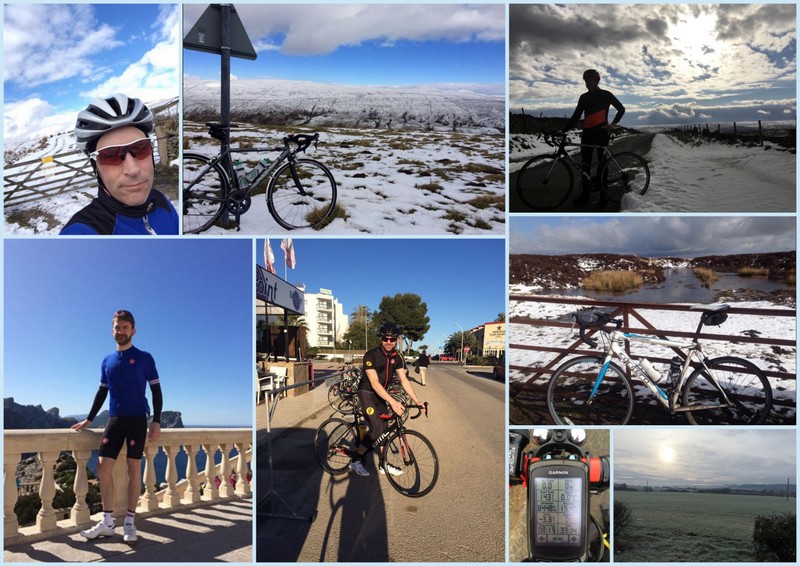 Nova member Simon Thomas and son Jack completed the 30-mile Evans Ride It Leeds on Sunday, riding from Harewood to Collingham-Wetherby-Sicklinghall-North Rigton before turning back via Leathley-Castely-Weeton to Harewood.

It was a tough day out for the Harrogate Nova members who braved cold conditions at the Leeds Mercury Reliability Ride on Sunday morning.  The 58 mile route took riders from Otley to Pool-Arthington-Harewood Bridge-Kirby Overblow-Sicklinghall-Wetherby before returning via Boroughbridge-Ripley-Killinghall-Penny Pot Lane-Norwood Edge-Farnley and a welcome descent back into Otley.

The final ride in the Yorkshire Magnificent Seven Reliability Rides series, the Prologue Café Bash, leaves Harrogate at 9:30am on Sunday 13 March 2016.

Harry Brook-Dobson claimed a fine 7th place in the Chippenham and District Wheelers 24-mile time trial, staged on the U83 course near Sutton Benger in Wiltshire on Sunday.  Harry clocked 58:02 for the challenging course which took the 75 riders from Sutton Benger through Lyneham and Wootton Bassett before heading under the M4 to Brinkworth, Malmesbury and back.  The event was won by Ben Anstie (73 Degrees Bicycles) in 54:39.