Posted on 13th December 2015 by Harrogate Nova Posted in News

It was a tale of two halves on Sunday 13 December 2015 – participants at round five of the CycloCross National Trophy at Peel Park, Bradford, had to contend with a water logged course and tonnes of mud, whilst members attending the Christmas Riding Out Lunch to How Stean Gorge battled icy conditions.

By the time of the Elite (senior race) at 2:30pm, conditions had deteriorated and pit crews were forced to work over time, with many riders changing bikes every half lap as the thick sticky mud took its toll.  Edwyn Oliver-Evans placed 41st out of a classy field, which saw Ian Field (Hargroves Cycles – Ridley RT) take a fourth win, and claim the series title.  Controversially, despite crossing the line first, Liam Killeen (Malvern Cycle Sport) was disqualified for a rule infringement whilst going through the pits.

Earlier in the day, Nova’s Dave Morris had an excellent ride to finish 24th in the Vet-40 race; Ted Sarmiento placed 47th.  Nick Mason and Tim Evans finished in 34th and 40th place respectively in the Vet-50 event. Louis Mason placed 44th in the Under-16 Boys event. 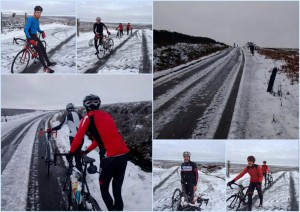 Meanwhile, back in Nidderdale, those brave enough to take on Trapping Hill were temporarily stopped in their tracks by icy roads.

Apparently, cycling shoes are no substitute for crampons….