TT Season Review, “Runners vs Cyclists” & Racing Round Up

Posted on 25th October 2015 by Harrogate Nova Posted in News

The Time Trialling season has been extremely active and successful this year.  Duncan Mullier became the Yorkshire Champion, winning the Yorkshire Cycling Federation Points series (6 counting events over the year).  A number of Club TT records also fell this year:

Sunday morning saw the annual runners vs cyclists event take place with a team from Harrogate Nova Cycling Club lining up against Harrogate Harriers.  Starting at the Ken Moore bench on Whinney Lane, Harrogate, the runners (who get a head start) can go cross-country via any legal route, whilst the riders must stick to the roads, before a short run to the ‘turn point’ on Almscliffe Crag, before returning to the start.  The four fastest times from each team are added together, and the Club with the lowest aggregate time are declared victors.  Unfortunately, the fastest Nova quartet of Duncan Mullier, Tom Denwood, Simon Ketteringham and Rob Senior were undone by Harrogate Harriers this year.  Congratulations to the runners – we’ll be back next year to try and reclaim the trophy!

Nova members have taken part in a number of ‘Cross events over the last few weeks.  At the Newsome High School event in Huddersfield, Charlie Cuss was 16th placed Senior and Richard Salden was 16th placed Vet-45.  A week later, Charlie was in action again in Round One of the Rapha Super Cross Series at Shibden Hall, Halifax, finishing as 18th placed Senior in the ‘War of the Roses’ event on Saturday.  On Sunday, round Two of the series, also at Shibden Hall, saw Nick Mason as the highest place Nova finisher, with an excellent 8th place in the Vet-50 event, just ahead of Andy Holgate in 13th.  In the Youth event, Joe Sarmiento placed 16th Under-14 and Louis Mason was 19th Under-16.  Gary Marks placed 22nd in the Vet-40 event.

Nova member Andy Stenson had an excellent trip to Adelaide, Australia to take part in the ITU Duathlon World Championships.  Coping with the heat as well as jet lag, Andy put on an impressive performance in a Team GB vest to finish fifth in his age-group, and 34th overall, from an international age-group field of over five hundred and sixty competitors.

Leaving behind the dull, cold Harrogate weather, a handful of intrepid Nova members travelled to the sunny Balearic Island of Majorca to take part in the Transtramuntana 4500.

The TT4500 is an extreme non-competitive cycle tourism trial, that takes in the whole of the beautiful Serra de Tramuntana (a UNESCO World Heritage site) that runs across the northern edge of the island, including Pollença, Lluc, Escora, Sóller, Deia, Banyalbufar, Estallencs, Andratx, before turning east to Puigpunyet, Esporles and Palmonyola then retracing the route from Sóller to Escora and Pollença to finish back at Port de Pollença.

Setting off with four hundred cyclists as dawn broke over Port de Pollença, the riders faced an epic 235km route across twelve mountain passes, with 4,500 metres of climbing, including the highest climbs in the Balearic Islands.  For those not wishing to tackle such a hard route, a shorter, slightly less hilly route was also on offer – the TT3000 – with six mountain passes, totalling 3,000 meters of climbing along its 170km route. 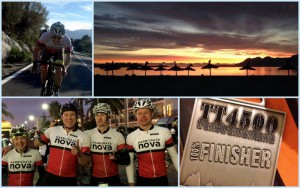