Posted on 17th August 2015 by Harrogate Nova Posted in News 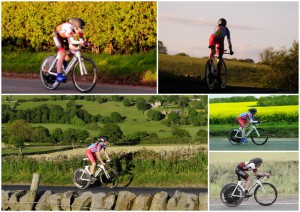 Perfect conditions greeted riders signing on for Event 15 of the Beech House Dental Practice Evening TT League at Farnham.  With Jess the last rider off at 7:34pm, she stormed round the 9-mile course in a time of 22:27 to reclaim the trophy she first won (with another dominant display) in 2013.

Jess also knocked 22 seconds off her own League Course Record, and now holds the best ladies times for all of the nine League courses she has raced.  On the night, Ele Haresign finished in second place with a time of 23:47, with Corrine Mitchell in third with 24:06.  Corrine’s third place was another Lady Veteran League Course record (her tenth of the season), and also guarantees her runner up spot on the Ladies League podium.  The third step of the Ladies League podium is yet to be decided, with only one point separating last year’s champion Alison Sarmeinto currently in third and Julie Patmore in fourth.  The hill climbs may yet play their part.

In the men’s competition, Nova’s Duncan Mullier took the win with 20:33, ahead of last week’s fastest man Fraser Rounds (Chevin Cycles.com Trek) who recorded 20:42.  Dylan Flesher (Prologue Racing Team) set another Junior League course record with 21:00, ahead of Simon Cave and Pete Watson who both stopped the clock at 21:04.

Tim Jarvis sealed his claim to the Vet-50 League crown with 22:09, with Mike Hudson and Walter Busuttil still battling it out for Vet-50 runner up spot, currently just one point apart in the standings.

Tony Kent was the quickest Vet-60 on the night with 23:46.  Harry Wrightson was again the most improved rider, knocking just over four minutes of his previous course best to finish with 25:13.

In Open Time Trials, Tom Denwood smashed the Club 100-mile record with a stunning time of 3:52:36 in the Yorkshire Cycling Federation event on the V275 near Topcliffe on Sunday morning.  Tom’s time was also good enough for second place behind Yorkshire Road Club’s Phil Turton who won with 3:51:54.  Duncan Mullier placed 6th in the same event with a time of 4:03:29, with Mike Hutchings stopping the clock at 4:39:42.

Harrogate Nova member Geoff Morgan set off on his quest to conquer the 1,200km Paris-Brest-Paris Randonneur just before 5pm BST on Sunday evening.

At the time of writing (8pm BST Monday 17 August), Geoff had safely completed 449km, and was well on track to complete the gruelling event within the 90-hour time limit.  Keep on pedalling Geoff – hopefully there will be a full update of his adventure next week.